While the subject of Concussion isn’t your typical Hollywood holiday fare, the film nevertheless touches many nerves, spotlights a terrific performance by Will Smith (even though he sports a mostly annoying Nigerian accent throughout) and takes the National Football League to task as the villain it was for many years as it seemingly ignored the concussion epidemic of its current and former players.

It all begins in Pittsburgh when longtime Pro Bowl center, Mike Webster (to layman out there, he’s the fellow that snaps the football to the quarterback), is found dead in his truck. Webster played for the Steelers from 1974 to 1988 and for Kansas City in 1988 to 1989. Here he is given life in a short, but memorable performance by David Morse (“The Odd Life of Timothy Green,” but probably best known as the prison guard, Bruno, in “The Green Mile”). Despite his supervisor, Dr. Daniel Sullivan’s (Mike O’Malley, “Leatherheads”) insistence he cover up the incident and claim natural causes, University of Pittsburgh neuropathologist Dr. Bennet Omalu (Smith, “Focus”) finds the man had no real problems, except that he was scarred, has Super-glued his teeth back in after pulling them out and had exhibited other signs of madness (of course, we know that Webster committed suicide, but Omalu does not).

Even before this situation, Sullivan has disliked Omalu’s attitude and job approach. He talks to the corpses (“Please work with me. Please help me find out how this happened to you,” etc., throws away expensive surgical instruments after each procedure and takes twice as long to do his work as anyone else). It’s a good thing the county coroner, Dr. Cyril Wecht (Albert Brooks, “A Most Violent Year”), is on his side.

Meanwhile, wondering why a man so young would die like this, the good doctor has the dead man’s brain further examined. The CT scans show nothing, so he orders extensive, expensive tests and pays for them himself (eventually to the tune of $40,000), suspecting that Webster suffered from a dementia resulting from repeated blows to the head in a similar manner to the already recognized condition of dementia pugilistica, a disease that is seen in professional and amateur boxers. His effort ultimately reveals signs of repeated concussive activity and damage on a more molecular level. And when another Steelers’ player Justin Strzelczyk (former NFL player Matthew Willig, “We’re the Millers”), kills himself in an automobile wreck and Philadelphia Eagles Andre Waters shoots himself, a pattern develops and Omalu continues to pursue these as concussion-related.

Actually, shortly after Waters’ death, former Harvard defensive tackle and WWE wrestler Christopher Nowinski — whose wrestling career was ended by post-concussion syndrome and has since written a book about the dangers of concussions in contact sports — approached Waters’ family and asked permission to have his brain tissue examined. After receiving permission, Nowinski had samples of Waters’ brain tissue sent to Omalu, who, after having examined the tissue, revealed that Waters sustained brain damage from playing football, which he blamed on Waters’ depression.

Working with Wecht and the director of the Alzheimer’s Disease Center, Dr. Steven DeKosky (Eddie Marsan, “Filth”), he publishes the results in the medical journal “Neurosurgery.” The malady, titled, chronic traumatic encephalopathy (CTE), is widely criticized by the NFL which uses its tremendous influence to ride Omalu out of Pennsylvania (he settles in California) while Wecht is arrested by federal agents and charged with 87 counts of fraud, misappropriation of funds and other crimes. Three years later, however, as the victims of CTE begin to pile up, a former NFL doctor and Steelers team physician, Dr. Julian Bailes (Alec Baldwin, “Still Alice”) join up, providing strategic knowledge and inside information about the League’s concussion protocol (or lack thereof).

The NFL continues to pooh-pooh his research, but Omalu (now married to Prema Mutiso, Gugu Mbatha-Raw, “Jupiter Ascending”) finally gets his chance to prove his point to the press and the NFL. Peter Landesman’s script based on Jeanne Marie Laskas’ article, “Game Brain,” attempts to give a feeling of place. While football may be important to some communities, in the city of Pittsburgh it is a major cultural force. Claiming that some members of its most successful teams died or took their own lives because of brain damages borders on the sacrilegious.

A few problems with Concussion include Smith’s accent — which goes way over the top at times — as does his repeated declarations (“Tell de toot. Tell de toot!”); it runs about 20 minutes too long; and, every time he and Mbatha-Raw engaged in their tepid love scenes, I found myself saying, “Let’s get back to the traumatic brain injuries already!” Still, it’s probably Smith’s best performance since “The Pursuit of Happyness” and has already earned him a Golden Globe nod.

As for the NFL, which had resisted for years, denying there was a problem even as reports streamed in that some were suffering long-term effects from repeated blows to the head on the gridiron, it is painted as the villain, but does not come off half as bad as it probably should have. 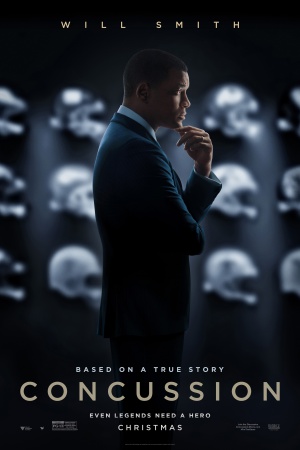