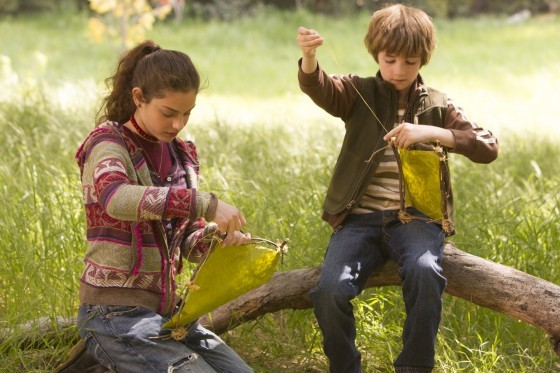 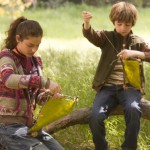 Disney Studio’s effort to create a benign supernatural tale — with more than a passing nod to “Forrest Gump” and “The Curious Case of Benjamin Button” — about a young boy who magically appears from a garden, at first seemed a bit ludicrous. Upon viewing The Odd Life of Timothy Green, however, reveals it is actually a bittersweet, emotional, heartfelt experience. Yet, there are some glaring distractions which make it difficult to give that experience a total recommendation.

Directed by Peter Hedges (“Pieces of April,” “Dan in Real Life“) and written by Hedges and Ahmet Zappa, The Odd Life of Timothy Green often cannot decide which road it wants to travel. Some critics may label this a well-meaning, yet thinly-vieled sentimental blah-fest, I tried to see it more as a positive family film, certainly flawed and certainly cliched in part, but overall somewhat satisfying with several genuine lump-in-the-throat moments. And, unlike the recent “Moonrise Kingdom,” where the presence of two offbeat young characters was a revelation, here, it becomes tiresome.

Told in flashback to an international adoption official, the story has married couple Jim and Cindy Green (Joel Edgerton, “Warrior,” and Jennifer Gardner, “Arthur“) unable to conceive, yet passionate about having a baby. So, in true Hollywood fashion, they write down the attributes of a perfect child and bury the notes in their garden. I cannot imagine anyone doing such a thing, but . . . thanks to a “Home Alone“-like mystical contrivance, though, a little boy, Timothy (CJ Adams, “Dan In Real Life”), makes his entrance.

At first, the Greens believe him to be a runaway, but realize he has come from a place they could not possibly comprehend (the leaves growing from his ankles illustrates the weird circumstances they find themselves in). They make no effort to explain his presence to family, friends and school officials, other than to say it was a miraculous adoption. Then, trying to be “perfect” parents, they find themselves repeating the same mistakes their own mothers and fathers did. This is especially true of Jim, whose dad (David Morse, “16 Blocks“) ignored him and/or bullied him for years.

Yet, for all of his strangeness (he goes into trances while looking at the sun and seems blissfully idiotic, at times), Timothy has a most positive attitude and brings joy to older actors such as M. Emmet Walsh (“Back to School“) and Dianne Wiest (“Parenthood“), among others. He also becomes involved with another bizarre loner, Joni (Odeya Rush, “Curb Your Enthusiasm” TV series), who has a birthmark instead of vegetation and drags giant tree limbs around on her bicycle. 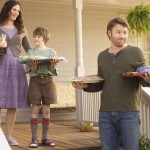 Meanwhile, a subplot concerning the possible closing of the town’s pencil factory causes more consternation, since both parents are employed at the plant. Token villains, including Cindy’s snobby sister, Brenda (Rosemarie DeWitt, “The Watch“), and factory owner Franklin Crudstaff (Ron Livingston, best known for “Office Space“), are inserted simply to root against. A sports element is also thrown in for no particular reason other than to show the good and bad side of moms and dads who derive success and failure from their offspring.

The messages contained within, while certainly valuable and acted admirably, often lack a sense of subtly — sometimes the writing is carved with a chisel and smeared with too many situations we have seen many times before. My frustration is how to separate the wheat from the chaff here. I think any movie that supports a pro-family, pro-adotion agenda has a definite place in our current film lexicon. I just wish that The Odd Life of Timothy Green was a better example of those values. 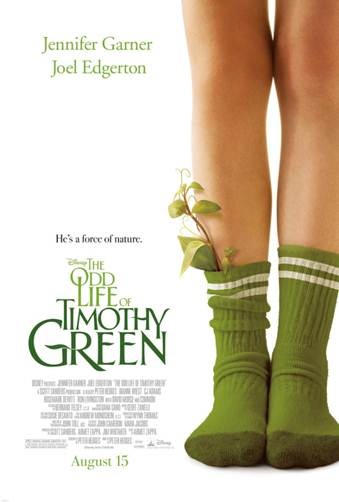