When I was growing up, reading science fiction from such authors as Isaac Asimov, Ray Bradbury, Robert Heinlein, and Arthur C. Clarke meant discovering new worlds of imagination and wonder. Sadly, what passes for science fiction today is mostly a reflection of a world imprisoned by fear. Christopher Nolan’s Interstellar, a visually thrilling film of almost three hours in length, does its best to recapture the wonder of space exploration as envisioned by its earliest dreamers, but even though it falls short, it has the courage to see the possibility of a world beyond our three-dimensional model, a world where love transcends time and space.

Co-written by Nolan and his brother Jonathan, Interstellar opens sometime in the future with the Earth in the midst of an environmental disaster and the survival of humanity threatened. Dust storms have destroyed the wheat harvests leaving only corn to save the planet from starvation. Cooper (Matthew McConaughey, “Dallas Buyers Club”), a single father and former NASA pilot, now works as a farmer to support his teenage son Tom (Timotheé Chalamet, “Men, Women & Children”) and daughter Murph (Mackenzie Foy, “The Conjuring”). “We used to look up at the sky and wonder at our place in the stars,” he tells his father-in-law (John Lithgow, “The Campaign”). “Now we just look down and worry about our place in the dirt.”

Murph tells her dad, however, that she has seen a ghost in her room that hangs around her bookcase, disturbing objects. When this poltergeist sends a coded message with directions to an underground NASA base, Coop again begins to look up at the sky. He soon discovers that one of his old teachers, Professor Brand (Michael Caine, “The Dark Knight Rises”) directs the NASA facility and has a startling story to tell him. Years earlier, five-dimensional beings created a wormhole near the planet Saturn to allow mankind to be transported to a galaxy far, far away when it became necessary.

Initial probes identified three potential planets that might be capable of sustaining life and Brand wants Coop to pilot a large ring-shaped ship called The Endurance to rescue a stranded astronaut, find the most suitable planet for colonization, and complete the mission. One of the problems identified by Professor Brand, however, is that there is a nearby black hole that will skew time so that one hour spent on the planet’s surface is the equivalent of seven years on Earth.

To undertake the mission, Cooper must leave his son and daughter behind with uncertainty as to whether he will ever come back or what age his children will be when he returns. Though the parting is swift, it is not without tears. Leaving his family behind, Coop is accompanied by Professor Brand’s daughter Amelia (Anne Hathaway, “Les Misérables”), two astronauts (David Gyasi and Wes Bentley), and the android TARS (voiced by Bill Irwin). Stunning state-of-the art visual technology and the cinematography of Hoyte Van Hoytema bring outer space closer than ever.

We are stunned when the crew encounters mile-high tidal waves rolling over the ship, when we witness the docking with another ship that has spun out of control, visit a planet filled only with water, and another where the surface is blocked by frozen clouds in the atmosphere. There are also emotional high points. For example, when the abandoned astronaut, Dr. Mann (in a surprise appearance by a major star) is overjoyed at being rescued but soon loses his grip on reality. In another moving sequence, Cooper views communications from home that span a period of twenty years (Jessica Chastain plays his grown-up daughter) and realizes that his children have given up the idea of ever seeing him again.

Interstellar maintains its tension throughout but, unfortunately, is hampered by poor sound mixing, banal dialogue, and a convoluted story that gives your brain a good working over but is inordinately filled with scientific jargon that eventually becomes off-putting. McConaughey does a creditable job in the lead role, however, but somehow remains aloof and never quite draws us into his character. Both Hathaway and Chastain do the best with the roles they are given, but their characters are seriously undeveloped.

Regardless of its flaws, Interstellar is a welcome change from standard Hollywood fare and is definitely worth seeing. Though you may have other interpretations of its meaning, to me the film is about humanity turning away from what is crumbling before our eyes and, rather than endlessly reciting Dylan Thomas’ poem about “going gentle into that good night,” letting go of our rage and welcoming the ineffable beauty of the light. 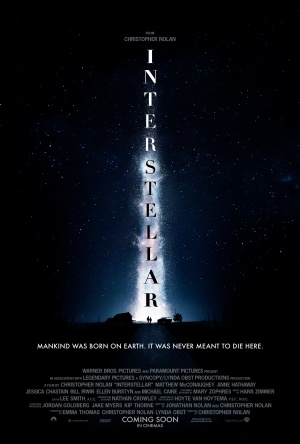