The Theory of Everything is a powerful, sincere film about one of the twentieth century’s greatest minds. That it never becomes mired in maudlin sentiment is astounding, given the standard succeeding-despite-the-odds story of its legendary subject, the esteemed physicist Stephen Hawking. The leads are more than adequate; they own the roles of Hawking and his beloved, devoted wife Jane in commanding performances.

We first meet Hawking (Eddie Redmayne, “Les Misérables”) at Cambridge, where he’s technically studying for his doctorate in physics. Hawking is one of those students who seem to be in every class you had in high school and college, the natural brain who never needs to study but still aces everything. But because Stephen is such a naturally nice guy, unassuming but gregarious, there appears to be little resentment of his skills. At any rate, his intellectual prowess comes to the attention of his professor, Dennis Sciama (David Thewlis, “RED 2”), who eventually takes his young genius to hear noted mathematician Roger Penrose (Christian McKay, “Rush”) explain his theory of how black holes are formed, which leads to Hawking’s theory of radiation that escapes from the collapse of stars that have gone supernova, i.e., Hawking radiation. Quickly, Stephen earns the notice of higher-echelon scientists around the world.

At a campus party, Stephen meets his future wife, Jane (Felicity Jones, “Like Crazy”), who’s opposite from Stephen in multiple ways — a student of Romance languages and their literature (not math and science!), a devout follower in the Church of England (not atheism!). She’s bubbly, wonderful, intelligent, and indomitable even for a Briton. She and Stephen spend the entire party talking on the stairs, but of course our hero gets her phone number at the end of the night.

But it isn’t long before odd things are happening to Hawking’s body. He begins to develop trouble with his gait, sometimes limping about. One afternoon, while hurrying across the campus square, Hawking trips, falling onto the pavement. In the hospital, the doctor gives him the terrible diagnosis — it’s the onset of ALS, Lou Gehrig’s disease. Its progression is swift, heartbreaking to watch, and Hawking is given only two years to live.

Jane, of course, stays by Stephen’s side, even as the disease robs him of the use of his limbs (save his fingers) and his voice. He’s able to present his dissertation, become a professor, and travel abroad. Jane (and their two kids) acquire a motorized wheelchair for Hawking, and when life with the (now) three kids becomes overwhelming, Jane hires an assistant to help look after Stephen.

Both Redmayne and Jones inhabit their respective roles, to the point that I genuinely accepted that Stephen and Jane Hawking were portraying themselves. The performances are superb, the kind of work that draws accolades on the order of shiny awards. There’s a fine supporting cast as well, but it is the dynamic between Jane and Stephen (and, by extension, Jones and Redmayne) that powers The Theory of Everything, forcefully propelling the film from mere biography to the exulted status of compelling drama. Redmayne plays Hawking not as a misfit who’s happier with math than with the company of his fellow man but as a living, breathing human with a wicked sense of humor, unending charm, and infinite charisma. 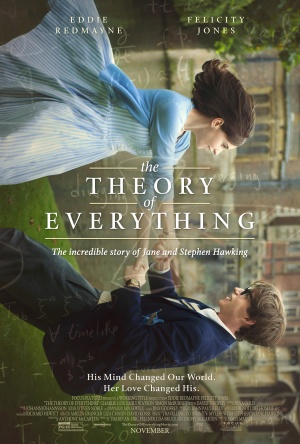