Foxcatcher, based on the real-life events surrounding the relationship between billionaire John E. du Pont and Olympic wrestler Mark Schultz, is a plodding, tone-deaf snoozer. The cast tries very hard to make things work, sometimes too hard. Even worse, all that made the true story so weirdly compelling in the first place is lost in the translation to the big screen.

Steve Carell (“Alexander and the Terrible, Horrible, No Good, Very Bad Day”) plays du Pont, the eccentric head of the eponymous world’s largest chemical company. du Pont is a self-described amateur-wrestling enthusiast, and following the 1984 Summer Olympics in Los Angeles, he summons USA gold medal winner Mark Schultz (Channing Tatum, “22 Jump Street”) to his palatial Pennsylvania home. His purpose is to convince Schultz to help him train, on site, a new squad of amateurs so that they can bring home the gold for the USA in Seoul, South Korea in 1988.

Mark Schultz has forever been in the shadow of his revered older brother David (Mark Ruffalo, “Now You See Me”), a fellow Olympian, and sees du Pont’s offer as a chance to do something on his own. Meanwhile, David remains home with his wife and kids, unwilling to uproot his family to help Mark and John train the new team.

Tatum does a fine job as Mark Schultz, an insecure and slightly envious young man whose medal has earned him the occasional check for speaking to grammar-school kids and little else. It seems everyone’s more excited about the successful, charismatic David, relegating Mark to the shadows. But Tatum isn’t given nearly enough to do, and there are some logical inconsistencies with his character. Mark Schultz spends almost half of the movie angry with John du Pont over a slight (a slight slight, as it were), and although his anger isn’t misplaced, it certainly feels overdone. Schultz comes off more like a petulant child than a grown up.

Steve Carell, as du Pont, is unintentionally hilarious. Carell almost literally sleepwalks through the role, with du Pont’s eyes half closed most of the time, and he mumbles in a shaky timbre. It’s clear there’s something wrong with du Pont (the mood swings are a none-too-subtle hint). It is not clear, until the final five minutes or so of the movie, just how wrong in the head the billionaire really is. That is, Carell spends 90% of Foxcatcher acting a little strange and then goes completely off the rails in the remaining 10%. It’s an abrupt change in tone that simply doesn’t make sense, since there is little to indicate the depth of his madness. Carell’s makeup is also of some interest; he seems to be wearing a few layers of pancake makeup along with a prosthetic nose, presumably to match what the real John du Pont looked like. The trouble is, most viewers probably don’t know what the chemical magnate looked like, so the effort to make Carell match du Pont is wasted. Worse, the whole get-up looks like a costume — unnatural and unnecessary.

This doesn’t seem like it would be a funny film. In fact, even if one has just a bare-bones knowledge of the plot, one would conclude that this is a dark drama. And yet there was laughter from the audience in the preview screening I attended, laughter stemming from dialogue that people thought was supposed to be funny or from the absurd, bordering on caricature, delivery from Carell. Every unintended laugh felt awkward, even cringeworthy.

Clocking at 134 minutes, Foxcatcher features approximately 124 minutes of slow-moving trains and about ten minutes of those trains suddenly crashing into each other at high speed. There’s a lot of buildup, but the ending comes so far out of left field that it’s beyond the bleachers, across the street, and halfway up the alleyway. 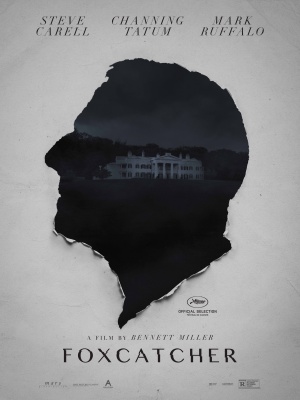