Haunt was written and directed by Scott Beck and Bryan Woods, writers on “A Quiet Place”; and while this is similarly high concept, it couldn’t be more different in tone. It aims for brisk, bloody and blackly comedic, and on those terms it delivers. The conflict in “A Quiet Place” was as much psychological as physical. Here, the scares are purely of the sensational kind. Sadly, the result is not very good.

Twenty-something Harper (Katie Stevens, “Polaroid”) dumps her boyfriend via text and then goes out for a night on the town. She meets a cute guy, Nathan (Will Brittain, “Kong: Skull Island”), who tags along with her group for a night at an “extreme” haunted house. The cocksure crowd surrender their phones and enter the asylum, where they soon realize that the horrors are of the very real variety. A myriad of lethal traps and mallet-wielding clowns await them.

Shot with a banal glossy efficiency, and scored with a flavorless industrial dirge by the prolific Tomandandy, Haunt haunts the realm of “Saw” sequels and the Platinum Dunes factory, where a simple (and nonsensical) concept provides a vehicle for a series of set-pieces linked together with the flimsiest of plotting and characterization. It’s a ghost train ride and as such it rests on the quality of its gross ideas. A couple of these are pretty good — like when a woman finds herself in an upright coffin, and a hole slides open at the top and a hundred tarantulas tumble down.

However, the ideas dry up fast and the film descends into a series of micro episodes involving characters crawling through samey tunnels and locking and unlocking doors. It’s like “Cube” meets “The Crystal Maze.” As soon as the youngsters split up, the editing becomes a confusing mess. For example, at one point we see a character who was fine a moment ago but is now a heap on the floor. We cut to a trapdoor in the ceiling — are we to assume they fell through? In a film which is happy to show a guy having his face peeled off with a hammer, let’s make the basics clear at least.

There’s another baffling moment where one of the killers asks, “Do you still want to see my face?” Well, of course we do! But then we suddenly cut to his victim splayed on the floor, with the de-masked attacker looming over him. Where was the big reveal, promised by the build-up? There are logic questions aplenty, too. Why is Harper sticking her hand into this random bucket full of dead birds? How’d she know there’d be a flashlight in there? And later, why is this character walking directly toward the automated shotgun she knows is imminently going to go off?

The film’s title doesn’t make sense. Sure, it’s the name of the institution, but there’s no actual haunting to be done here, just a bunch of standard issue bad guys dressed in gloomy clown masks like “The Purge” or “You’re Next.” (I wonder, do these oddballs hang out at the Haunt all day, conversing in their gravelly voices? Do they send out one of their lesser minions to fetch a round of lunch wraps from the local mall, while they wait for new victims to swing by? I mean, what is their business model?) Other clichés include a creepy music box and a scene where an innocent victim is dressed up like the enemy.

Stevens is not an engaging or convincing presence, sporting a single facial expression throughout the entire film. Brittain is game, but his jock character is vanilla through-and-through. I figured he was going to turn out to be double-crossing sleazebag — but no, he really is meant to be our hero. There’s also a so-called comedy sidekick, Evan (Andrew Caldwell, “College”), who has Adam Sandler-scale anger issues. And he’s about as funny as Adam Sandler. Finally, there are some interchangeable female friends. Some of these people will be slain, and the killings are suitably grisly, usually involving heads being smashed, squashed or impaled.

But all the blood in the world can’t make this boat float. If it weren’t for its “A Quiet Place” kudos, the Eli Roth producer credit, and the flashy production values, Haunt would vanish like the vaporous nothing it is. Even a terrible film can linger in the memory, but this is just dismally mediocre. 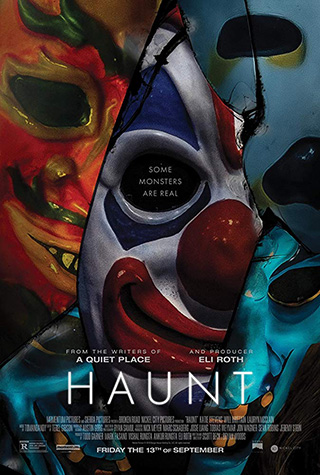