The innocence of children has been one of the main themes of Iranian cinema in recent years. Films such as Majid Majidi’s “Children of Heaven,” Abbas Kiarostami’s “Where is the Friend’s Home?” and Jafar Panahi’s “The White Balloon” not only depict the children’s innocence, but also their hardships and spiritual strengths. Reza Mirkarimi’s (“Daughter”) Castle of Dreams (Ghasr-e Shirin), aka “The Sweet Palace,” continues in that tradition with the story of two children of considerable charm, Sara (Niousha Alipour) and Ali (Yuna Tadayyon), whose continuing devotion to their disillusioned father, Jalal Moradi (Hamed Behdad, “Sly”), begins to break down the barriers between them and to develop a new understanding of their relationship.

Written by Mohammad Davoudi and Mohsen Gharaie, like Kiarostami’s “Taste of Cherry,” Castle of Dreams is a road movie that features a depressed and isolated man seeking a way out, but Jalal is very much unlike the introspective and poetic Mr. Badii. Neither a paragon of virtue nor a poster boy for the joys of fatherhood, Jalal is a desperate man bent on avoiding any emotional or financial support for his children. Released from prison after serving time for involuntary manslaughter, the 42-year-old Jalal left his wife and children and moved to another city, but has now returned to his home town two years later to find his wife critically ill. Jalal wishes to profit from his wife’s illness by selling her car and moving to Azerbaijan and to leave his children in the care of his sister-in-law, Nasrin (Azadeh Nobahari).

Nasrin’s determined husband, however, wants no part of that and lobbies Jalal to take the children with him. He resists but, after what seems to be an interminable length of time pondering the alternatives, grudgingly agrees to take them. Unceremoniously depositing them in the back seat of the old car which does not sound as if it will make it to the next corner, the road trip begins almost 40-minutes into the film. Though Ali is older and more serious than his unbearably cute sister Sara, the impressionable boy believes the story his mother told him about his father living in a magic castle and wants to go there with him, still attached to his dad despite everything that has taken place.

Sara, not comprehending the chaos going on around her, is more concerned with the well-being of her pet turtle Water Color and pressures Jalal to turn the car around to rescue it and bring it with them. After learning that his wife has died, Jalal picks up his girlfriend Najmeh (Zhila Shahi, “Orange Days”) whom he introduces to the children as his business partner, but soon begins to berate her for looking like a “floozy.” In return, Najmeh calls Jalal a liar and a cheat which, given the character of the man depicted thus far, does not seem unreasonable. A crying Najmeh tells Jalal that she wants to have children with him, but he demurs which prompts her to abruptly get out of the car and find a way home with Jalal’s sly assistance.

The journey eventually includes Jalal bribing a policeman who wants to impound his car for reckless driving and Jalal being violently assaulted by his ex-wife’s two brothers, for which no reason is provided. The focus of the film, however, is not on the incidents that take place in the present or those in the past but on the evolution of Jalal’s character. While the negative picture that is presented of fatherhood may be a hard sell in a nation that prides itself on the strength of the family, Behdad’s brilliant performance draws us to him in spite of his lack of connection with others.

Gritty and realistic in the mode of minimalist French films of the past, Castle of Dreams contains no dramatic peaks and valleys, only a constant undercurrent of tension throughout. While Jalal’s transformation is subtle and there are no blatant emotional appeals, the children’s resilience more than compensates for the film’s lack of dramatic urgency. Through Ali and Sara, we get a deeper insight into Jalal’s character — his realization of his own loneliness and that of his children and a growing awareness that allows him to consider the notion of living simply and peacefully, turning the hardships of the past into a different vision of what a castle of dreams looks like.

Castle of Dreams screened at the 2019 Vancouver International Film Festival. 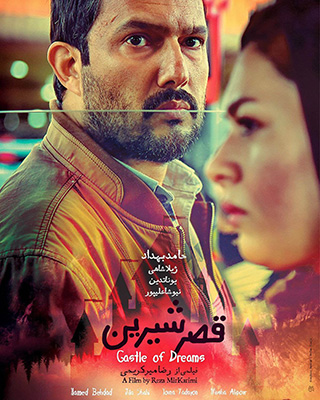