With one co-directing credit under his belt (“Smoke Filled Lungs”), writer/director Jason Cabell begins his sophomore film with a surprising amount of confidence. Leading with intriguing, juxtaposing images of torture and partying aided by a smooth soundtrack-driven flow, the opening scene of his first solo-directed feature Running with the Devil teases a style generally uncommon to similar crime films. Right off the bat, Cabell employs familiar technical flourishes that easily establish characters and their weaving relationships with each other in a condensed, palatable period of time. With an ensemble of accredited talent, it would seem Cabell has all the components needed to craft an enjoyable, if simplistic drug thriller. Sadly, that hope only lasts so long as the film’s alluring setup gives way to predictable, derivative payoffs.

While mostly adhering to typical tropes of the genre, Running with the Devil at least has a promising first act. Keeping things in focus, Cabell centers almost all the action around a single ongoing cocaine shipment, intercutting its journey simultaneously with the characters in pursuit of it. The rising price of the product is frequently stamped onscreen for all to see, maintaining a sense of progression when things get slow. Even further to his credit, Cabell wastes no time with names for his characters, each of whom is instead granted their own easy-to-remember title, also stamped onscreen. It’s not a new technique, but given how many characters are being balanced here, it works to streamline their introductions.

Although the film is headlined under the star power of Nicolas Cage (“211”), there is a decent-sized ensemble of noteworthy talent, such as a no-nonsense DEA agent (Leslie Bibb, “Tag”), a snitchy foil (Adam Goldberg, “Zodiac”), and the kingpin behind the entire operation (Barry Pepper, “Crawl”). There’s even an amusing — if somewhat startling — sex-crazed turn from Laurence Fishburne (“Ant-Man and the Wasp”), who at the very least looks like he’s having a ton of fun in this role.

On one side of the coin, you have Cage portraying “The Cook,” a surprisingly subdued, literal cook who moonlights as an auditor for The Boss (Pepper). While The Cook is charged with the task of supervising the drug shipment and curtailing any potential interference, Cage manages to bring a slight enigmatic nature to the character, which does nothing but benefit his mundane proceedings.

On the opposite side, we have the folks on the receiving end of the shipment (Fishburne, Goldberg, Bibb, Pepper), who are engaging in what appears to be a routine movie drug investigation with very little nuance to engage with. As these journeys begin to intersect, the narrative seems to lose steam and resort to weaker choices in dialog and telegraphed double-crossings. Even Cage ends up falling into his usual trap of overpassioned delivery in stark, unwelcomed contrast. While the title cards are an appreciated motif, Cabell retreats all to often to the “cut to black” to punctuate a moment, and it just feels tired after a while.

Running with the Devil succeeds in its simplicity, but unfortunately has very little else to offer once its bulk of characters ratchet towards the climax. Every once in a while a moment will land with aplomb (there’s a brief-but-fun bit of tension at one point when a knife gets pulled), but the sum of its parts ends up collapsing with little to no weight. To be sure, there’s promise in Cabell’s craft, but Running with the Devil feels too been-there done-that to find a suitable place outside of a Redbox kiosk.

'Movie Review: Running with the Devil (2019)' has no comments 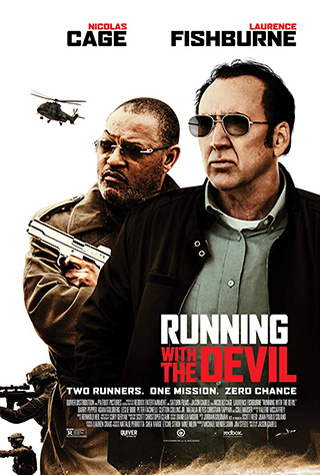