You know how, when you draw a bath and the water’s too hot to get into, so you let it sit there for a while but when you come back it’s too cold to get into, thus rendering it kind of useless? That’s what 211 is like. It’s tepid, lifeless, waste of time (if not talent).

The basic story is that of a bank heist in a small town in Connecticut. Nicolas Cage (“Ghost Rider: Spirit of Vengeance”) plays the this-close-to-retirement cop partnered with a good guy who’s married to Cage’s character’s daughter, who’s just discovered she’s pregnant. Cage and partner MacAvoy (Dwayne Cameron, “Nice Package”) spot an SUV parked in a handicapped spot, and when they approach the illegally parked vehicle, all heck breaks loose. Adding to the chaos is the fact that the duo have been saddled with a ride-along named Kenny (Michael Rainey Jr., “Barbershop: The Next Cut”), who’s there only because he socked some bully at school.

Oh, and the bank robbers? Just the typical ex-special-ops soldiers with grudges, out to right a wrong with extreme prejudice. We learn this in the first scene, which provides the most interesting action in the movie, as the unit’s former commander or lawyer or something, who has just snagged millions of dollars electronically, is nabbed by said unit, whom said commander left for dead somewhere when things got hot. That whole scene sets up the heist and yet is infinitely more interesting than the heist itself.

The motivation for the robbers is nice information, but it’s ultimately not necessary information for the viewer to have. The tagline for 211 is that it’s a cross between “End of Watch” and “Black Hawk Down.” So obviously the robbery is the focus here. Four heavily armed banditos with a plan storm into this small-town bank, where their lawyer/commander/whoever stashed some of the funds he apparently owed them. Their plan: Take hostages, take money, shoot guns, and then leave. I mean, that’s about it. It’s not a complex plan, and I applaud them for keeping it simple, but it didn’t seem like they had a clear exit strategy (kind of like the US involvement in the Middle East, am I right?).

Back to Cage. So of course it’s his last days before semi-forced retirement. And of course his partner is married to his (Cage’s) daughter (Sophie Skelton, “Day of the Dead: Bloodline”). And of course the daughter is pregnant. Those contrivances don’t mean Cage is going to just delivered a half-assed performance! No, he’s going to full ass this one. I saw a lot of cheesy movies just like this in the 1980s. The acting in those movies, while not very good, would still outpace the acting here. This isn’t just mailing it in, this is shipping it via a container boat across the Pacific. There’s even the spectacle of a hyper, stressed Cage screaming that his “son is dead,” even though in the movie he doesn’t have a son. I mean, he has a son in law, but he wasn’t dead. Or maybe he was referring, obliquely, to his unborn grandson? Also not dead, but maybe if . . . Oh, never mind. I’m twisting myself into knots trying to find logic in a parallel universe where logic never even visits.

211 is a pretty abysmal film. Even the action scenes are pretty tame and uncreative. The acting veers from wooden to unhinged. It’s so bad that it’s no fun to watch at all, even as an instructive guide on how to make a crappy movie. 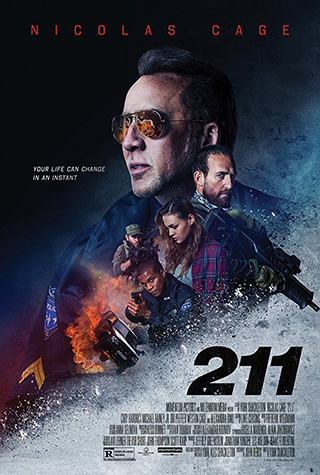