The cop procedural is a struggling genre, at least as far as film goes. With so much new content provided weekly via television shows, there’s hardly any room to grow. Yet it remains one of the more popular genres viewed at home, and honestly, home is probably the best place to view Hangman, which hardly amounts to anything more than a grab-bag of cop movie clichés pinned on a dartboard as the writers take aim.

The hook admittedly had potential.

A serial killer who hangs his victims and carves a letter into them is on the loose in Baltimore. With the badge numbers of both grizzled retiree Ray Archer (Al Pacino, “Stand Up Guys”) and a tortured widower Will Ruiney (Karl Urban, “Thor: Ragnarok”) found on the scene, they must team up with Pulitzer-prize winning journalist Christi (Brittany Snow, “Pitch Perfect 3”) to find the murderer before his carved letters begin to finish the Hangman puzzle left at every crime scene.

The inherent problem with the hook is that it barely serves a purpose outside of a gimmick. No guesses are made by the police force as to the puzzle’s solution or motivation. It’s not treated like the game that it is.

This is roughly Pacino’s tenth time playing a cop, so by now you’d think he’d have enough experience to bring something new to the table, but his performance is disappointingly blasé and seemingly uncaring of the severity of events around him. Snow, doing a decent job with what’s given, plays the journalist Christi, whose character serves primarily as an audience avatar, riding along with the cops and doing things that no cop in their right mind would allow a ride-along passenger do. Urban’s performance is more what we want from this sort of movie, but he’s roped with the banal dead wife storyline where the killer got away. Naturally, the cops’ current case gives way to more information about his wife, yet in no way changes the outcome, progress, or quality of the film as a whole.

The script to Hangman is not any of the actors’ friend here either. There is not a line here that hasn’t already been said in a dozen cop dramas before it. It’s hard to quantify how many dumb decisions are made in this movie, including the multiple occasions the cops visibly see the killer, yet always find a reason to avoid pursuing him directly. Even the conclusion — both the reveal of the puzzle and the killer’s identity — is underwhelming.

While there are some good things here, none of them can be considered original by any means. Deaths are appropriately gruesome, but one in particular is so over-the-top it steals the movie. The score, from the opening credits on, blasts heavy crescendos and eerie strings throughout, giving way too much weight to the already weightless, and it’s admittedly kind of fun to see how over-dramatic it can get at times.

There is definitely an audience for this kind of movie, and it’s not a bad inclusion to D-grade Redbox cop thrillers. That doesn’t take away the fact that there are genuinely talented people behind Hangman that are given almost nothing to work with. As the puzzle gradually adds more letters, the hook wears thin and begins serving as a clock, letting the viewer know how many more kills until it will all finally end. And it thankfully does end almost exactly as it started: In the most dull, derivative, and formulaic manner. 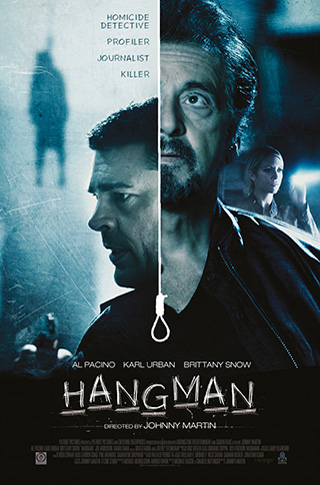