There is no missing the ubiquitous presence of muscular megastar Dwayne “The Rock” Johnson in the hearty mix of action-packed spectacles that seem to pop up on the big screen at an alarming rate. The heralded Hollywood hotshot has in recent years, with larger-than-life charm and muscles, convincingly taken over the mantle of being the modern-day box office bad-ass previously held by the likes of Arnold Schwarzenegger, Sylvester Stallone and Bruce Willis. And like those before him, his resume has more dimwitted than decent features in it. His latest, Rampage, is another example of the former, although it will provide cinematic pleasure to his avid wrestling fans (both past and present) and devout action loving moviegoers with plenty of explosions, butt-kicking and witty-ish one-liners.

Based on a popular late 80’s vintage video game, Brad Peyton’s (re-teaming with his numbing natural disaster flick “San Adreas” leading man Johnson) heavy-handed and cartoonish movie adaptation aims to ignite the conventional “man vs. beast” theme in an empty-headed, formulaic sci-fi actioner that pits the bulky Johnson against a trio of mutated behemoths in a clumsy ode to the relentlessly cheesy, yet classically appreciated, creature features of yesteryear. Good ole cinema beasts such as King Kong and Godzilla (both of whom have enjoyed recent cinematic revivals) need not lose any sleep, however, because Rampage is simply not competent or captivating enough to stomp out their celebrated world destructing swagger. It is one thing to grab a joystick and mindlessly indulge in the fun of smashing buildings and bystanders as one of three giant creatures, but watching it play out via a razor-thin plot adorned with CGI overload just doesn’t pack as powerful an entertainment punch. But at least this disaster display does not mirror the sandy disaster of the insufferable “Baywatch” . . .

Withdrawn primatologist Davis Okoye (Johnson, “The Fate of the Furious”) is weary when it comes to his fellow human beings, but he certainly has a deep affinity for the animals he cares for and studies religiously. In fact, Davis’ “bromance” with an albino gorilla named George (whom he rescued as a baby from opportunistic poachers) cements that Davis has no real bonds with those around him and he and hairy pal George are tight and loyal to one another only.

Soon, the buff and bashful Davis and George will come to the crossroads in their friendship when something freakish happens that will end up affecting society as a whole. What happens, you ask? Well, the handful of screenwriters — Ryan Engle, Adam Sztykiel, Ryan Condal and Carlton Cuse — concoct a goofy plot that involves a mutated gene-virus-like specimen crashing to Earth from a super-secret space laboratory that ends up causing dangerous growth spurts to anything ingesting it while making those infected even more aggressive and confrontational.

And yes . . . you guessed it . . . poor George is one of the unfortunate targets subjected to this elaborate scientific foul-up.

Once his large amiable fur-ball friend, Davis must now tangle with a supremely super-sized and agitated George and figure out how to save his life. If only it were so easy — also joining George in the animal-induced rampaging are an equally enormous and angry lizard and wolf. The titan trio ruthlessly converge on the Windy City, knocking over skyscrapers and causing considerable chaos to the panicked people trapped in the monsters’ maelstrom of destruction. Cue Davis Oyoke — conveniently a former Special Services Army Officer — to save the city from these giant, violent animals (ones, if normal-sized, he would normally risk his life to protect) and figure out who or what is behind their affliction.

Aimless and cheaply roguish, Rampage sputters along in eye-rolling CGI excess and transparent action sets. Even as charismatic as Johnson is (an undeniable truth), he cannot quite overcome the labored follow-the-dots frenzy in this turgid teaser. The supporting characters feel like stock players along for the ride, solely there to add further fodder to Johnson’s character’s unconvincing angst. Recent Oscar nominee Naomie Harris (“Moonlight”), inexplicably trapped in this cornball creature caper, is thoroughly wasted as Johnson’s obligatory romantic interest Dr. Kate Caldwell. She is a woman trying to overcome her questionable testing tactics courtesy of her guilty association with the Wyden siblings, Claire (Malin Akerman, “The Final Girls”) and Brett (Jake Lacy, “How to Be Single”), two conniving capitalists who are pathetically posed as the genuine monsters of the movie. Plus, Jeffrey Dean Morgan (“Desierto”) slums as a one-dimensional CIA Agent Harvey Russell who wants desperately to be seen as cool.

In short, meant to sensationalize and capitalize on the giant monster film resurgence, Rampage instead plays out with the imaginative thud of a skyscraper brick crashing on a cement sidewalk. 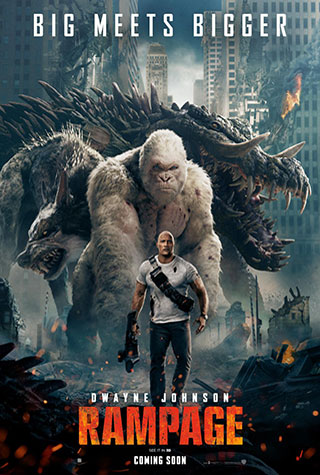