San Andreas stars Dwayne ‘The Rock’ Johnson (although ‘The Rock’ is no longer a necessary addition to his name to know who he is) as admirable Search and Rescue helicopter pilot Ray Gaines. He’s the kind of person you want to have around when a pickle jar can’t be opened or when the largest magnitude earthquake in history breaks off. Luckily for his estranged wife Emma (Carla Gugino, “Sucker Punch”) and daughter Blake (Alexandra Daddario, “Percy Jackson & the Olympians: The Lightning Thief”) he’s in the right place at the right time (we’d expect nothing less) as the infamous San Andreas Fault gives way and a city crumbling quake hits California pegging the needle at over a 9 on the Richter scale.

Ray’s family are by no means dependent on his heroic displays though. Make no mistake about it, these women are more than capable of looking after themselves when faced with the end of their world. Far from the typical “damsels in distress” archetype, Emma and Blake are strong, skilled survivors who take everything Mother Nature has to throw at them. Having said that, they can only get themselves so far before Ray has to swoop in and save them from impending doom (it wouldn’t be fair to take that pleasure away from him now would it?).

Johnson, who has successfully transitioned into the world of movies (leaving his wrestling career behind him until his inevitable return), has adequately proven his acting ability in quirky, family friendly roles like “Tooth Fairy” and “Journey 2: The Mysterious Island” and shown he can bust heads alongside the best of them in films like “Pain & Gain” and “Furious 7.” However, in San Andreas he tries to move away from confident joker and strongman and into the territory of subdued, forlorn, abandoned husband and, unfortunately, he gets lost amongst all the noise and falling debris. “Foreboding scientist” is also too much of an obvious role for Paul Giamatti (“All is Bright”) who plays the film’s central seismologist Lawrence Hayes. It felt like he was just going through the motions (pun intended).

But don’t you dare let this put you off from going to see the devastation! San Andreas is one hell of a frantic, white knuckled fairground ride. Describing a scene in which Emma is sitting enjoying a meal at the top of a skyscraper when the earthquake hits, director Brad Peyton says, “We literally travel with Emma, with no cuts, through a collapsing building. You’re moving with her and seeing it through her eyes, sensing the thousand split-second decisions she has to make to get from here to there as the environment is constantly changing.” Now imagine that mind blowing scene and plenty of others like that in 3D that wasn’t applied as an afterthought. The theater experience is money well spent.

And speaking of getting your money’s worth, San Andreas is also a very greedy disaster movie, combining many real and make believe world disasters into one. There’s a clear influence from “Deep Impact” with the appearance of a devastating tidal wave that drowns everything in its path. There’s also scenes heavily reminiscent of 9/11 and it even has a “Terminator” feel about it as Mother Nature relentlessly pursues Ray up the San Andreas Fault Line with an onslaught of shockwaves.

Yet as impressive as the action is in this film, Peyton has clearly tried not to make it the sole focus. A heartfelt storyline — written by Carlton Cuse — is shoehorned in in order to connect viewers to a human element amidst the chaos. Unfortunately, this aspect was not pulled off to anywhere near the same level of success as its “action” counterpart. It’s not bad, it’s just not overwhelmingly good either. Also, by focusing on the plight of just two families it made it seem like all the other destruction and death happening around them somehow didn’t matter all that much.

Recently it was reported by the U.S. Geological Survey that the probability of a magnitude 8 or greater earthquake hitting California in the next 30 years has increased dramatically. As the prospect of being involved in a disaster in our lifetime grows, it does make one wonder “what would you do in a life or death, fight or flight scenario?” Can people count on you and you on them? Peyton believes so, saying, “Disasters have a way of bringing out the best in people. Individuals gain focus and find strength. Ordinary people become heroes, while others push themselves to the limit.”

While highlighting the mostly good in humankind, his San Andreas is also a cautionary tale that shows no matter how fabulous the means of communication and technology we have at our disposal to try and control our everyday lives and surroundings, it’s all basically pointless when Mother Nature is out to flex her muscles. She can — and will — reduce everything to rubble in a mere instant, our safeguards be damned.

The only chance of certain survival it seems will be to get as near to Dwayne Johnson as possible and hope for the best. 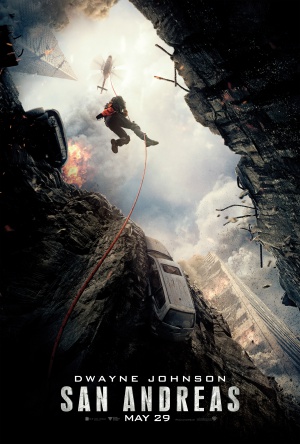