The name “Stephen King” is synonymous with horror and indeed with movies in general. With such famous associations as “The Shining,” “Carrie,” “Misery,” “Salem’s Lot,” “Pet Cemetery” as well as “The Shawshank Redemption” and “The Green Mile,” not to mention television horror “It,” “The Tommyknockers” and “The Stand,” the King brand is one that continues to carry weight and recognition.

A Good Marriage is unlikely to achieve the classic status of “Misery” or “The Shining,” but it still manages to evoke decent tension and effectively convey a sense of the terrible amidst the mundane. Set in King’s beloved Maine in a pleasant neighborhood reminiscent of “Carrie” and “It,” A Good Marriage focuses on Darcy (Joan Allen, “The Bourne Legacy”) and Robert (Anthony LaPaglia, “Without a Trace” TV series) Anderson, the happy couple with everything — a nice house, plenty of money, beautiful children, professional success, good hobbies and a 25th wedding anniversary attended by friends and family. Yet amidst these celebrations, dialogue and news footage drop hints about a serial killer in the region, while later on a horror movie on the TV causes consternation. Director Peter Askin and screenwriter King open the film with a sinister monochrome sequence, making it clear that there is a dark side to this tale.

This foreshadowing is possibly a mistake, as it makes later revelations less shocking than they might have been. That said, part of the pleasure of horror is the utilization of familiar tropes, so as events develop the viewer can enjoy the steady reward of expectation. Askin paces these scenes carefully, while director of photography Frank G. DeMarco uses just the right amount of handheld cinematography to express unease and discordance. Meanwhile, Danny Bensi and Saunder Jurriaans’ evocative score helps create a brooding, menacing atmosphere and Sharon Lomofsky’s production design combines a detailed home environment with succinct ironies — a cushion embroidered with the words “KINDNESS MATTERS” — and generic echoes — pictures of birds at the Andersons’ home recall the taxidermy of “Psycho.” In the midst of this careful design, Allen and LaPaglia convincingly portray a couple deeply familiar with each other, complete with affectionate quirks such as notes and pet names for each other.

The pet names do prove a little irritating — “bad bad girl” and “naughty boy” are rather creaky — and there is some obvious and distracting product placement of Apple and Bing. Surreal moments suggest there may be something supernatural at work, due to King’s back catalog, and these moments are slightly jarring as they are actually dreams or fantasies. But for the most part A Good Marriage draws the viewer in nicely over its first act, letting us get comfortable with the Andersons so that we can subsequently get uncomfortable if not overly surprised with the subsequent revelations. Once the big reveal is past, a peculiar sense of expectation weighs over the second act, as it seems evident that something more will happen, and it could go one of several ways. As Darcy and Robert continue going through the motions of their titular union, the viewer may wonder if they will pool their resources or turn on each other. As a result, when the next major revelation occurs, it is also not a great surprise, but it is handled effectively and draws the viewer’s sympathy in a particular direction.

This sympathy means that the viewer finds questionable actions understandable and can admire the skill with which these actions are executed (pun intended). It also demonstrates the manipulative effects of cinema. Early in the film we are aligned with one character as they make disturbing discoveries. Later we follow this same character as they do questionable and potentially disturbing things, but we go with it because we have shared this character’s perspective. The intimate cinematography follows characters around the house, evoking a sense of claustrophobia and near panic. The surreal moments mentioned earlier are from one perspective and so help audience alignment further. As a result, we are suitably aligned when events take a twist that, while not surprising, is still gripping and arresting.

The film comes close to being stolen, however, by a last act turn from Stephen Lang (“Conan the Barbarian”) as Detective Holt Ramsey. Ramsey is a generic cliché who appears throughout the film in the background, observing the events with a shambling gait and constant coughing. He therefore echoes such detectives as Humphrey Bogart’s Sam Spade and Philip Marlowe as well as Jack Nicholson’s Jake Gittes in “Chinatown.” But much like Tommy Lee Jones’ Samuel Gerard (“The Fugitive”), Lang turns this cliché into something fascinating. His two scenes with Allen are electrifying as the two actors spark off each other in scenes that are brilliantly understated, as they discuss issues of morality and righteousness. While A Good Marriage is not a striking horror film, the last act intrusion of Ramsey takes it into more philosophical territory about what is justifiable and how one lives with questionable acts.

Twenty years ago, Lang and Allen both appeared in Michael Mann’s “Manhunter,” a truly striking, compelling and in places terrifying watch. A Good Marriage pales in comparison to that earlier serial killer thriller and is ultimately not a great film, nor even a particularly good one. Taken on its own merits though, it is an effective watch and worth seeing for Lang’s appearance alone. 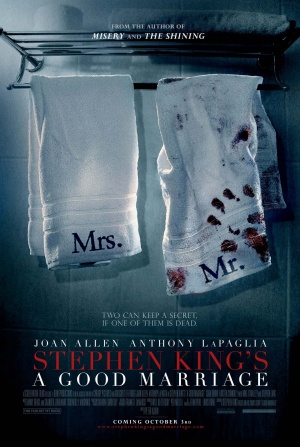