The first rule of a frightening film, as outlined in meta masterpieces like “The Cabin in the Woods” and “Scream,” is that in order to be punished, our protagonists must first transgress. Going somewhere they shouldn’t, engaging in nefarious activities, hurting another person (whether they meant to or not) . . . one or all of these things must happen in order to raise the stakes, create the drama, and help us viewers — as imperfect people ourselves — find something in the characters to identify with.

As Parasites begins, we viewers are waiting for that first transgression. Three college aged friends — played by Sean Samuels (“Almost Broadway”), Jeffrey Decker (“Anonymous Killers”) and Sebastian Fernandez — drive through Los Angeles at night, listening to sports radio. They’re all male; two of them white and one, black. As they wind through the darkened city streets, lost and unable to use their phones’ GPS, they pass by scores of tented settlements spread out across the sidewalks. From the safety of a new silver Chevy, they observe the endless homeless population spread throughout the streets, lamenting gentrification in between arguments amongst each other about where they are and where they need to go.

Suddenly, a tire blows out. The querulous bunch has no choice but to pull over on a shady street corner. Once they exit their vehicle, what was a familiar automobile inconvenience suddenly becomes a unique and never ending nightmare. The body count starts racking up quickly and the morally complex cat and mouse chase that will continue for the duration of the night and the film begin, culminating in an extremely heavy handed ending that could have worked — it truly could have — but unfortunately does not at all.

The problem with Parasites is that it so clearly wants to say something about America’s current racial and political environment (and what a perfect time for such a film to be released), but it doesn’t. The fact that it wants to say something is made abundantly clear, but what it’s actually trying to say never is at all.

That initial transgression, that one our three unlucky travelers would have to have made in order for their violent fate to (not be justified, of course, but at the very least) make some logical sense, never happens. When they get out of the SUV, it’s even revealed that the source of their flat tire was a plank with an obscene amount of nails stuck into it deliberately placed in the middle of the road (i.e., it wasn’t even bad luck that put them in their situation, but sabotage). Truly, these boys have done nothing wrong. Which is probably why, upon exiting the vehicle and finding themselves confronted by a mob of vagrants headed by the confident and loquacious Wilco (Robert Miano, “No Way Out”), they seem to see no problem asking for help. Once they do, however, they are attacked.

Parasites wants to say something about class, but it doesn’t. It wants to say something about race — with as many slurs directed toward black, Asian, and Hispanic characters as they could fit in the script, it seems — but it doesn’t. It wants to say something about culture in general but, ultimately, this hodge podge of emotionally charged symbols (a young man being shot while wearing an Obama t-shirt, a sex worker and her stereotypical addict pimp/boyfriend living in an old church abandoned because of “the economy, I guess,” a homeless Korean war veteran wiping liquor from his flask off of a windshield with an American flag) does not say anything at all. It’s form over function to the point of exploitation and emotional manipulation, and at no point does it appear to have a clear plan. Just look at the title alone — who are the parasites supposed to be? Wilco’s many messy monologues imply that we’re meant to believe there’s a role reversal here, that the upper classes leech off of the lower classes, but neither that nor the traditional concept of it being the other way around are actually displayed or explored.

All of this having been said, there are some great shots in this film. The way different characters are framed, how time and distance and fights are portrayed, the pacing (for the first two thirds, at least), and the way light is used (especially considering how dark this movie is, for the most part) are commendable, to say the least. The music, too, was great; suspenseful, evocative of a turgid nocturnal world, very sinister (and very ‘80s — I found myself wanting to re-watch “The Warriors” by the end).

By its extremely predictable and poorly pulled off conclusion, all of the film’s racial slurs, incidents of violence, and rather large number of characters (the majority of whom end up dead) coalesce into a mess that nothing can be gleaned from, especially when contrasted against the samples from the news played as the credits roll. Best case scenario, Parasites is an example of a good idea coupled with a poor execution. Worst case scenario, it is exploitative and without a plan. I guess that’d explain who the parasites are after all. 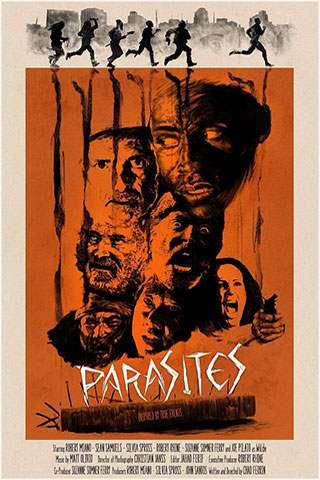