Mary and the Witch’s Flower, based on the English book “The Little Broomstick” by Mary Stewart, is the first female-led action action fantasy film exploding into theaters in 2018. Originally released in Japan in 2017 this new movie, engineered by some of the directors and animators behind classic cartoon adventures such as “Spirited Away,” “Howl’s Moving Castle,” and “Arrietty” was clearly intended to be a similarly colorful journey that would perennially appeal to children and adults alike. Unlike the three aforementioned films, though, this fantastical tale of self-actualization is not a product of Studio Ghibli (or something older audiences are likely to enjoy). Rather, it is the maiden mission of Studio Ponoc, an animation studio formed with the goal of carrying on Studio Ghibli and visionary anime juggernaut Hayao Miyazaki’s work after Miyazaki left and Ghibli closed. The studio’s name, “Ponoc,” is even based on the Croatian/Serbian word for “midnight,” and its status as the one time each day that is both a beginning and an end.

In many ways, Studio Ponoc’s debut film is an excellent facsimile. For example, the animation is as dynamic, meticulous, and gorgeous as expected. Mary’s England is replete with fantastical spaciousness, an homage to the respect for nature animators observed in the source material. And if you think the houses, costumes, and flora are beautifully rendered, just wait until our young protagonist (as ambitious, cranky, strong willed, and dangerously curious as many Ghibli heroines before her) finds herself at Endor College, a steampunk school of sorcery in the sky. Unfortunately, the beginning of Mary’s journey is the end of the best aspects of her movie. Once the plot really gets going, an exciting set up overflowing with quirky characters and hidden mysteries begins hurtling through a poorly explained universe to an extremely unsatisfying — and alarmingly abrupt — conclusion.

Because that’s what happens in Mary and the Witch’s Flower: Spunky Mary (voiced by Hana Sugisaki, “Blade of the Immortal”), recently relocated and incurably bored while her parents are away and with only a week left before starting her new school, finds a “witch’s flower” in the woods. Upon her discovery, a hidden broom reveals itself and intuitively whisks the young girl — and an equally temperamental cat named Tib — to the college in the clouds.

Up until this moment, the movie is perfect. We want to see Mary, significantly self-conscious about her big red hair and frequently brushed off by elders she attempts to assist due to her inherent clumsiness, go out for the ride of her life. Even Peter (voiced by Ryûnosuke Kamiki, “Your Name.”), the only child her age Mary is seen to interact with after her move, makes fun of her redheaded and awkwardness. So, when she arrives at Endor only to be mistaken for a very advanced witch due to the powers granted by having touched the flower when she found it, both the girl and her audience believe this is exactly what she needs. For once, her heretofore ridiculed hair color is praised as the hallmark of a prodigy the likes of which, the gleefully impressed headmistress Madam Mumblechook (voiced by Yûki Amami, “Kaiji: The Ultimate Gambler”) tells her, only comes around once every hundred years. Far from the girl underfoot dropping tea cups and snapping flower stems, for the first time Mary is treated as significantly more skilled than the students around her — even, after quickly being ushered there, literally blowing Endor’s most advanced class away.

Again, Mary and the Witch’s Flower is still fun, and worth watching. It’s just that viewers hoping or expecting to be as fully transported to a wholly realized universe as Sophie in “Howl’s Moving Castle,” or for Mary to become deeply involved in and the ultimate savior of an unusual world she’s slipped into as Chihiro in “Spirited Away,” will find themselves let down and confused. Madam Mumblechook is no Yubaba or Witch of the Waste. In fact, in establishing her character, Mary and the Witch’s Flower appears to attempt to do something I generally love in film (i.e., actually explaining a bad guy’s history and motivations rather than making them monolithically evil), except without the necessary follow-through.

It is explained that the headmistress and her co-conspirator, a professor named Doctor Dee (voiced by Fumiyo Kohinata, “Last Cop: The Movie”), started out with good intentions before transforming into the villains Mary contends with on screen. What’s missing, however, is a lucid explanation — even in summary — of what transpired between then and now, what exactly the terrible twosome is trying to achieve, and why exactly it is bad. All we know is that they would’ve gotten away with it, too, if it weren’t for two kids and their meddling cats! Because of this, defeating Mumblechook and Dee never does feel satisfying, and neither does Mary and Peter’s refrain of their desire to “go home together” toward the end of the film, seeing as how it follows absolutely zero development of the relationship between the two children who, again, never really got along that well to begin with.

Another of the main issues with Mary and the Witch’s Flower is exactly how its magic works; the broomstick Mary finds in the woods and a Master Spells book she steals from Endor function as overly convenient phlebotinum that allow the girl to too easily travel to and from her new pastoral home. This lack of challenge is another aspect of the film that Ghibli fans are not accustomed to; we’re used to protagonists confined to a castle (however movable), or a spell, or a bath house, or even a specific goal, with more concrete challenges and measurable character development as they are overcome. The philosophy behind Endor College also seems like what it would be to attend a course at Hogwarts about the principles behind Clarke’s third law and “The Island of Doctor Moreau” taught, in turn, by the X-Men’s Magneto and Syndrome from “The Incredibles” — in short, a somewhat convoluted mess.

So, while I commend Studio Ponoc for crafting beautiful imagery and the first half of a really good story, if other films they put out in the future echo its sentiment they will be much more well received by younger audiences than older. And as someone who grew up on Ghibli and continues to enjoy similar work as an adult, that makes me want to hop on a broomstick back to the world of “Kiki’s Delivery Service” and as far away from Endor as I can get. 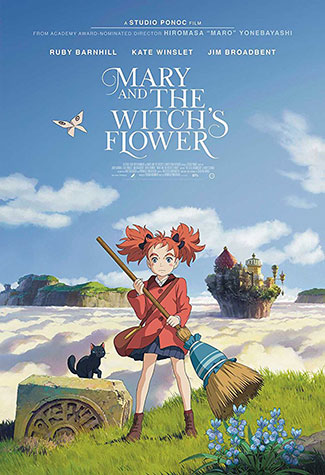