Anthologies are a kind of a risk/reward endeavor. It’s a great way to keep a series fresh and innovative, especially as age goes against it, but iconography can often ruin those kind of plans. Remember when “Halloween” was supposed to be an anthology series? Not only did “Halloween” become too popular for its own good, but they shot themselves in the foot by doing a Michael Myers centered sequel as the first follow-up, so by the time “Halloween III: Season of the Witch” rolled around, it alienated most audiences. It’s a shame too, since it’s in my mind an overlooked gem in the genre.

I think what benefited “10 Cloverfield Lane” was time. A sequel to the original, “Cloverfield,” wasn’t fast-tracked, I imagine audiences had moved on, so the announcement of a follow-up was likely a surprise to anyone who wasn’t a hardcore fan. Not only that, but much like the first, it had that signature J.J. Abrams intrigue about it, with vague marketing and impressionable mystique. And the biggest strength to “10 Cloverfield Lane,” at least as far as a franchise installment goes, is that it alludes to the questions in your head but doesn’t given a definitive answer. So where could the franchise go from here? There’s not exactly a template comparable, other than episodic TV series.

So now, in a surprise release a mere couple of hours after its official announcement and trailer, we have the Netflix Original, The Cloverfield Paradox. And it’s honestly kind of a dud. Now, I’m not going to stand on a soapbox over the marketing. Marketing is marketing, it’s designed to get you in a seat, honestly or not. I don’t care if the movie isn’t what was promised in a trailer so long as the movie is good in its own right.

The film follows the crew of Cloverfield Station, tasked with creating clean, sustainable energy through a particle accelerator, the consequences being dimensional intersecting and other strange phenomena. Like any other film like it, there’s tension between crew members, and inevitably death and destruction. The only thing separating it from the likes of “Event Horizon” or “Life” is its endearing, if not misplaced and often tone-deaf sense of humor. This movie, particularly in the first half, has some major tone inconsistency. A little levity here and there isn’t a bad thing, but its execution undermines the intended thrills.

Inconsistency is a word. The film cuts back and forth between Ava (Gugu Mbatha-Raw, “Concussion”) on the station, and Michael (Roger Davies, “Hounded” TV series) as he deals with the chaos on Earth. Sounds pretty standard, right? The usual tragedy in their past caused a rift they’re rebuilding, and the stakes on both ends of the spectrum make them wish they could see each other again. And yet, it feels so disjointed. Almost the entirety of the Earth scenes involving Michael feel like they were added in pick-ups. Now, that’s just an assumption, as any number of factors could be the cause, but whatever the reason is, The Cloverfield Paradox has some major identity crisis.

I’m not talking about mixing genres, in fact I often like films that are hard to classify conventionally. My problem is I feel the Cloverfield license, if you’d call it that, is actually a disservice to the narrative. Instead of just being a space thriller in over its head, it also haphazardly tries to be the glue that ties all three movies together. It works when it’s a quick blink and you’ll miss its Easter egg, and there are a few of those, but the moment it broadly and clumsily twists itself into some grand revelation, it invites scrutiny. Instead of merely alluding to some greater whole and allowing an audience to project their own conclusions like its predecessor, it cements its developments as fact. Now all the inconsistencies start to worm their way in. Anachronisms, contradictions, and timeline. What’s worse, it tries to hand wave these away with a certain science fiction trope that only succeeds in making the project even more convoluted.

To be honest, I can see why Paramount sold this one to Netflix. “The Cellar” was a great thriller that was given a marketing push with “10 Cloverfield Lane” as its new moniker and allowed it to have a much more unconventional denouement. “God Particle,” on the other hand, seemed an overly ambitious project that managed to rake in what amounts to little more than made-for-TV fare. The Cloverfield name couldn’t necessarily elevate it, but would rake in the numbers, if not in theaters, than by other means. This doesn’t deter me from the inevitable fourth installment, as this whole thing is one big experiment and there was bound to be a misstep sooner or later. It’s just a shame that The Cloverfield Paradox — the most boastful of the bunch — is the one that falls under its own weight.

'Movie Review: The Cloverfield Paradox (2018)' has no comments 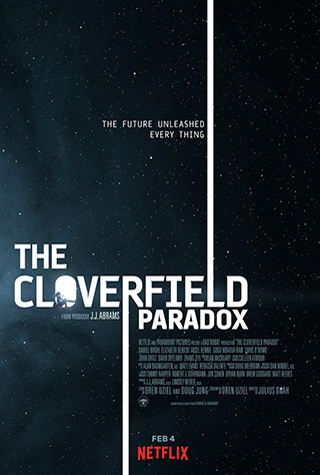