As you’ve grown up, have you ever been ostracized from other children, for whatever reason? Maybe you were the kid who smelled, or wore thick glasses. Maybe you simply liked things that weren’t cool enough for elementary school status quo. Children generally have little-to-no sense of empathy when they’re that young, and so school can be a source of constant misery if you happen to be the right (or wrong) kid. What we often don’t realize, however, is how our experiences have a lasting effect. I sure as hell don’t look back on certain chunks of my school days with any sort of poise. That’d be a good story to write about, right? Well when we do, it’s often far too one-sided. “Stand by Me,” “Dazed and Confused,” or anything John Hughes or John Hughes inspired, as much as I like those, are broad strokes. How do you frame childhood, detachment, and accompanying depression without burying yourself in melodrama or Sunday school moral antics? Well, this would probably be a good place to start.

A Silent Voice (based on the manga of the same name) follows a group of schoolmates, a boy named Shôya (voiced by Miyu Irino, “The Garden of Words”) in particular, from two points in time. Elementary school, where an inciting incident split them apart, and high school, where Shôya’s failed suicide prompts him to reconnect with a girl he once bullied as a kid and make amends. Shoko (voiced by Saori Hayami, “Gantz: O”), the girl in question, is deaf, and Shôya, at the encouragement of most of the other children, would harass her, mock her, and even made her ears bleed once when he removed her hearing aids suddenly. Though of course, when the faculty gets involved, the other children make Shôya their scapegoat, the teacher included, who did nothing to prevent Shoko’s harassment until he could pass the buck when the principal confronted him.

So now a social reject, Shôya spent the years between elementary and high school isolated and guilt-ridden with no one outside of his mother to support him. However, he slowly makes friends again over the course of the story and is, in the eyes of the audience at least, able to successfully make up for his shortcomings in the past. But, his self-deprecation and guilt still eat away at him, so he still has trouble socializing or connecting with anyone. And it’s this moral grayness of the entire film that works so well. People are people and faultlessness is a facade, so every character’s point of view is easy to understand whether or not you disagree with it. There’s also an interesting visual motif I think could only work in animation where we see people crossed off with blue X’s on their face when viewing the world from Shôya’s perspective. If he acknowledges or feels any sort of connection with a person, the X is not present, not only emulating social media blocking or removing but also the crossing off on a list, like a scribble. It’s a great visual shorthand.

Each character, to some degree, represents the kind of child you might’ve grown up with or been classmates with, and while the archetypes are there, they still feel like people. When someone does something questionable, it stems from their failings as a human being as opposed to stereotype. Shôya was a bully, but the kind I was in kindergarten, acting out because I was unhappy with my surroundings (at least before the pendulum swung and I became the punching bag). There’s no leather-jacket wearing prude with a switch blade in his pocket. A Silent Voice does not pretend to have all the answers, it simply strives to give Shôya a reason to forgive himself and want to live. It’s a fascinating lens.

Ultimately, I’m speaking in thematics because I don’t want to give away the turns the narrative takes. Let’s just say I’ve seldom seen a movie handle this subject as maturely as it does. That’s impressive considering this is an animated film which admittedly takes some realistic liberties with both the device I mentioned earlier and an injury later in the film. Which again, demonstrates the medium’s advantages. We associate animation with the abstract, so these don’t stick out as much as they would in live-action, and modern audiences get hung up on petty grievances enough as is. I’ve heard a lot of comparisons to this and “Your Name.,” and while I still love the former, A Silent Voice is just a riskier, deeper project. Go in with the basic premise and let it sink. 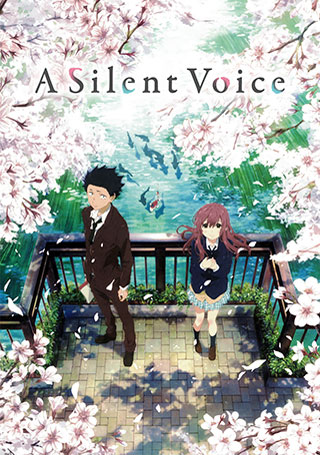