Let me be blunt for a second. “Blade Runner” never needed a sequel. Yes, I know. It’s a tired statement, I get sick of hearing it too. You could argue most movies don’t need sequels. But “Blade Runner” really did not need one, more so than others, and there are a number of factors contributing to that fact. Not the least of which is ambiguity. Pure, and simple. A lot of it’s strength is predicated on it, though it does vary depending on the version. But therein lies another hurdle, trying not to alienate those who canonize different cuts of the film, as it is infamous for. Not to mention matching its massive influence to both dystopian storytelling and cyberpunk culture. “Blade Runner” was lightning in a bottle, and a lot of its success, while warranted, is almost comically inadvertent.

Regardless, here we are. 35 years later, helmed by Denis Villeneuve (“Arrival”), of whom I have been a large fan of up until this point. Blade Runner 2049 picks up three decades after the events of the original film, Tyrell Corporation has been bought out, Replicants were prohibited and later reinstated under stricter policy and cities have become gridlocked and towering as populations have been exponentially increased. We follow our protagonist Officer K (Ryan Gosling, “The Nice Guys”), who is revealed to be a Replicant Blade Runner very early in the film, effectively avoiding treading that same ground again. This plot point is very matter of fact and necessary to elaborate on some of the film’s themes. I won’t give anything else away.

Through K, we see how the political climate of this world has changed in years proceeding and in some ways, has not changed at all. Through his work, we see the conflict in pursuing and “retiring” his own kind, as well as accentuating the existential quandaries between humans and Replicants alike. Especially in the wake of evolution. There is a change found in Replicants that could unravel societal stability and provoke riots, even war. K investigates its validity off the books. This isn’t the first time I’ve been as vague as possible, and just like before there is a reason for it. There is a lot to reveal, and the marketing refused to show its hand.

What is shown in full glory is Roger Deakins’ spectacular cinematography. And believe me, the film will let you know it. The entire film’s aesthetic is rich and textured, but still appropriate for the universe. There are echoes of the world we knew decades prior, but things have naturally evolved and shifted, but not to a point where it’s unrecognizable. It even replicates the original’s thematic throughline with a fresh set of eyes without outright repeating it. It’s honestly a new measuring stick for sequels. Taking elements from its predecessor and either expanding on them, or taking what did not work about them, and reworking it into a positive element. Between this and “War for the Planet of the Apes,” it’s a good stance for science-fiction’s place in the medium. It even treats its callbacks with very little overt fanservice, letting them play as it would naturally.

Performances are captivating, in both major and minor roles, and Gosling is able to carry the entire project with his trademark stoicism in its purest, most concentrated level since “Drive” came out six years ago. What may have devolved into a Hollywood-manufactured debacle fueled by quick cuts and bogged down in stylistic visuals with no accompanying substance or meaningful context, is instead an exercise in pragmatism, toxic and beneficial. And believe me, I’m not knocking a CGI-fest, I’ll pop in “TRON: Legacy” any day of the week, but the point is if any follow-up needed to be more than just surface-level, this was it.

There is no shortage of philosophy on display either. It’s warranted by its world-building, made easier by audiences familiar with the original. It takes what we know and puts a far more emotional spin on it. We sympathized with the likes of Roy and Pris in “Blade Runner,” and now we put ourselves in their shoes through K’s eyes in 2049. We get to live as them. It’s the kind of retroactive awareness “Prometheus” and “Alien: Covenant” both failed miserably to inhabit. It not only invokes the same allegory of civil rights within an oppressed workforce, but accentuates the thematic value of men reaching out to their higher power. Indeed we even witness the birth and dismissal of some, as if life was just one more technological amenity.

It has been a long time since 1982 and yet by some achievement, Blade Runner 2049 feels as if it’s as natural a follow-up as it could possibly be. If history repeats itself, some will inevitably call it self-indulgent or excessive, whether referring to its production design, runtime or both. I can see it being dismissed as cold, alien. I wouldn’t even be surprised if it failed at the box office. I call it an experience. I call it tactile and atmospheric. Engaging and intentionally systematic. Or to put it simply, I call it “Blade Runner.” 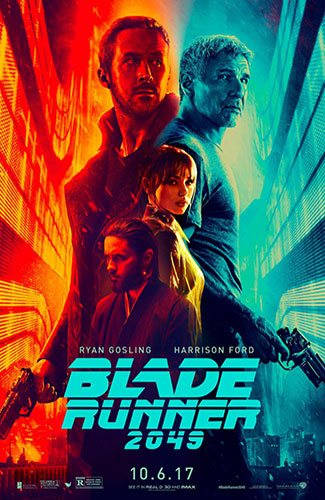