Director Ridley Scott returns to his “Alien” roots with Prometheus, a lavish prequel, well done in its visuals and aesthetics, yet somewhat soulless as a whole. And while the plot brings the story of rogue — almost invincible — entities wiping out various interstellar crews full circle, one wonders what the point of the entire enterprise was and who was clamoring for such an effort in the first place.

Also, one cannot help but compare the two films, and although 33 years apart, the 1979 original appears even more favorably when one realizes that today’s vast technical film industry leaps were not available then. The special effects and seamless amazing visuals of Prometheus only serve to highlight just how skilled those artists were in producing “Alien,” one of the best-looking, terrifying, FX-filled movies of that era.

Then there is the story of a spaceship landing on an unknown planet (in this case a moon orbiting an unknown planet), the crew exploring the surface only to meet strange and often violent life forms. This film, however, takes place years before the Nostromo set down and discovered pods, eggs, suspicious androids and finally, vicious, deadly monstrosities. Here, it’s 2092, and a pair of scientists, Dr. Elizabeth Shaw (Noomi Rapace, “The Girl with the Dragon Tattoo“) and Dr. Charlie Holloway (Logan Marshall-Green, “Brooklyn’s Finest”), discover a series of artifacts from different areas that seem to point to man’s worship of a supreme being (what, there are no Bibles, Torahs or Korans in the future?!).

Getting a bead on a heretofore undiscovered solar system, a corporation headed by ancient Peter Weyland (an unrecognizable Guy Pearce, “L.A. Confidential”), finances the journey with Captain Janek (Idris Elba, “Thor“) in charge and overseen by stoic ice queen Meredith Vickers (Charlize Theron, much less animated than her role in “Snow White and the Huntsman“). An attempt is made at some character development with these, as well as gruff geologist Fifield (Sean Harris, “A Lonely Place to Die”) and another ambiguous automaton, David (Michael Fassbender, “Shame“). 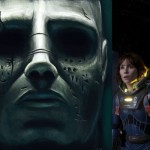 It’s David’s actions which really confuse, though, as in one scene he tries to infect Dr. Holloway and then in another saves the life of Dr. Shaw. Meanwhile, as the group explores the bowels of a cave and tunnel system, they happen upon a relic craft left 2,000 years before, complete with ghostly hologram recordings of the long-dead humanoid crew. Are these the creatures who created Man? Shaw and Holloway seem to think so, yet Shaw has doubts and fears that can only be cured by a good dose of sex (hey, who can disagree with that?). This leads, unfortunately, to one of the picture’s most graphic and gruesome sequences that will — literally — have many viewers turning away from the screen.

When the “makers” turn out to be not as benevolent as hoped, though, the various cast members are served up interplanetary style and the graphics department goes into overtime with bubbling viscous, grotesque mutants and huge craft from the past and future battling it out on this barren, forlorn wastescape. And though interesting to a point, this plot pales in comparison to Scott’s first thriller (and it was just that, where one did not even see the full alien until the end). The characters in that film (Ripley, Ash, Dallas, Lambert, Brett, Kane, Parker) were as fully developed as any could be in a film like this. Here, we get a tiny glimpse into these individuals, but there are people on the screen that seem to come and go, and are beaten and crushed with nary a feeling of care or empathy from the audience.

Scott has definitely mastered the creepy, futuristic, forlorn, atmospheric art direction, set design and costumes (credit Marc Homes, Sonia Klaus and Janty Yates, among others) to a tee. Fans of the franchise (the first two movies, the rest do not count) will also point in recollection and no doubt admire the amazing visuals and expansive viewpoints, and even the plausible (as well as far-fetched) scientific advancements.

But with a confusing, slow-moving story that tries to mirror the original “Alien” — down to the most remote detail (blame writers Jon Spaihts and “Lost” creator Damon Lindelof for removing the terror and tension, however) — and little, if any memorable characters, Prometheus ends up just being wonderful to look at, and should not be taken very seriously.

In space, it’s said, no one can hear you scream. In the theater listen closely to the sighs of disappointment for what Prometheus could have been. They’ll be deafening.