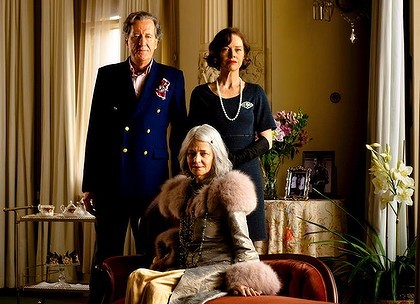 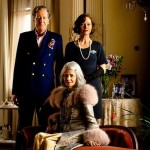 On account of its dense and lengthy disposition, adapting Patrick White’s acclaimed novel “The Eye of the Storm” for the screen was never going to be easy. In the hands of Melburnian filmmaker Fred Schepisi, though, the adaptation has given rise to an engrossing acting master-class of a drama. Set in Sydney sometime during the 1970s, The Eye of the Storm possesses an old-fashioned, traditional tenor in all filmmaking aspects, from its gentle score and patient dramatic growth to its grand production design and non-flashy cinematography. Mature, psychologically complex and often sedate, Schepisi’s feature is permeated with intricate themes about life, death and wealth. It’s wonderful, sophisticated adult entertainment.

In the Sydney suburb of Centennial Park, wealthy matriarch Elizabeth Hunter (Rampling) lies on her deathbed, orbited by housekeeper Lotte (Morse) and nurses Mary (Theodorakis) and Flora (Schepisi). Close to death and with her inheritance needing to be sorted, Elizabeth’s offspring come home to visit: Sir Basil (Rush), a famous actor who has fallen on hard times, and Dorothy (Davis), who married into French royalty before ending up divorced and cash-strapped. Regardless of her fading health, Elizabeth remains a destructive force, continually torturing her children who are determined to leave Sydney with a hefty inheritance.

The characters at the centre of The Eye of the Storm are a dislikeable bunch. Elizabeth is often demeaning, while her kids and house staff are scavengers hoping for riches, and even the family’s loyal lawyer (Gaden) has his self-serving moments. However, none of the characters are surface-level; there are further intricacies to each of them which are revealed as time goes by, and it’s their flaws and nuances which make them so compelling and recognizably human. Perhaps the picture’s biggest asset, though, is the dialogue. A high caliber team of actors were recruited for the film, all of whom were fed juicy, engaging dialogue to deliver. Furthermore, the narrative is well-designed — writer Judy Morris has done a sublime job of adapting Patrick White’s novel into a screenplay. Morris’ script takes no shortcuts, permitting each character and subplot the development that they deserve. But, with that said, the film doesn’t exactly reach the profundity or richness that White’s novel achieved, although this is probably just due to the restrictions of the medium of film.

The Eye of the Storm is a gorgeous film, magnificently lensed by Ian Baker and elegantly designed by Melinda Doring. Most of the story occurs in and around Elizabeth’s mansion, so director Fred Schepisi employed everything in his cinematic arsenal to avoid the static look of a filmed play or a lowly tele-movie. Thus, Schepisi’s camera tracks and glides, yielding striking dolly and jib shots. The lavish production design of the ’70s mansion would have been enough to maintain a degree of visual interest throughout, but Schepisi and his cinematographer went the extra mile, resulting in a skillfully crafted motion picture. Paul Grabowsky’s classy jazz score is equally beneficial, tenderly instilling an evocative sense of time and place. However, the picture does tend to keep us at arm’s length from time to time. 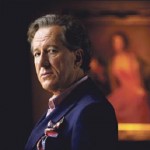 It’s a rare occurrence to see a troupe of such formidable actors assemble for any film, let alone an Australian production implemented on a modest budget. Yet, The Eye of the Storm features a handful of excellent performers at the top of their game playing meticulously devised characters. Geoffrey Rush is superb as Sir Basil, giving convincing life to this distinguished theatre actor whose life lacks intimacy. Rush delivers several engaging pieces of narration throughout the film which give unforced insight into the type of man that Sir Basil is. With Rush having wasted too much time on films far below his acting prowess (“Green Lantern,” “Pirates of the Caribbean: At World’s End”) it’s great to see the Australian appearing in films of this caliber. Similarly, Charlotte Ramping is a tour de force as Elizabeth Hunter; her performance is effectively dramatic, intense and believable, and Ramping fantastically conveys her character’s mental confusions as Elizabeth grows close to death. Judy Davis, meanwhile, is wonderful as Dorothy, and the director’s daughter Alexandra easily holds her own as attractive young nurse Flora.

The Eye of the Storm is a classy, grown-up Australian drama. It’s magnificently multifaceted stuff, intimately exploring the emotional wreckage of a dysfunctional family with sophistication and acerbic wit. Older audiences who prefer dramatic storytelling over effects-laden blockbusters will no doubt be riveted by the picture, though it’s difficult to imagine its appeal broadening much beyond this demographic. It’s therefore rather refreshing to behold a film which refuses to relinquish artistic integrity for the sake of box office dollars. 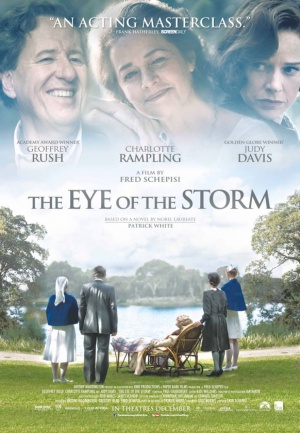