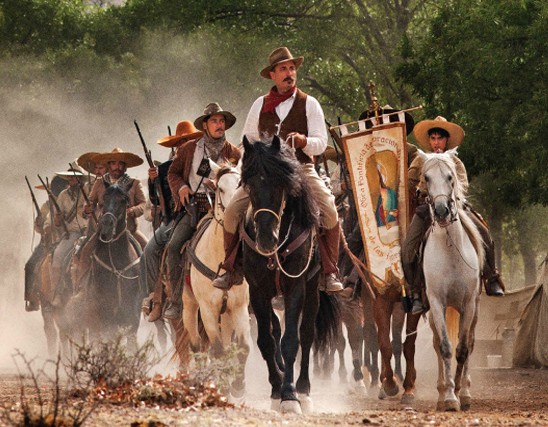 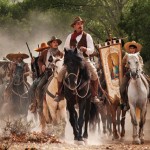 A bunch of horses.

As a film critic who has a belief (or faith) in a being greater than myself (I know, I’ve just alienated about 50 percent of the readers), it’s hard not to notice Hollywood’s prevailent tendency to belittle and impugn Christianity. However, with the advent of “Joyful Noise” in January and now For Greater Glory I’m wondering if the embracing of religion is the start of a new trend.

But while “Joyful Noise” was harmless, mindless fluff touching on songs of worship, this new release — bankrolled by several independent, faith-based groups — spares no subtly on its pro-Catholic Church message. In fact, it pounds that message into the ground with the force of a jackhammer (as well as poor direction, sub-par acting, often banal dialogue and amateur camera work that is both irritating and seizure-inducing). Yet, for all of that, there are some standout performances and an strong emotional thread, plus, I think the story needs to be told — I just wish first-time director Dean Wright (a visual technician for such films as “Titanic“) and writer Michael Love (“La Leyenda del Tesoro“) could have told it better.

In 1925, after a series of violent revolutions transformed Mexico from the quiet, bucolic country led by a series of generals, corrupt officials and high-minded civilians, into a quasi-socialist republic, President Plutarco Elias Calles (a terrific job by Ruben Blades, “Safe House“) has practically outlawed the Catholic Church, in practice, but not theory. His federal soldiers, like the Nazi stormtroopers in “Schindler’s List,” ride into villages, wreck and desecrate houses of worship, capture and/or kill priests and constantly terrorize believers (where is the Magnificent Seven when we need them?). A series of laws passed several years earlier — to separate church and state — are the basis of these actions.

Many of the Mexican people, however, with Catholicism so much a part of their culture, begin to fight back, first with passive disobedience and economic embargoes, then, finally, with armed resistance. Leading this revolution-within-a-revolution at first is outlaw Victoriano ‘El Catorce’ Ramirez (Oscar Isaac, “Drive“) and his priest brother, Father Vega (Santiago Cabrera, “The Life of Fish“). A series of underground networks supply men and ammunition, while many women in the country smuggle items for the cause. When the government begins to crack down, however, a more organized resistance is called for.

Enter Gen. Enrique Gorostieta Velarde (Andy Garcia, “Ocean’s Thirteen“), a former war hero who had defeated the likes of Pancho Villa to secure the current administration and its subsequent oppression. Even though Velarde (an atheist, that respects freedom of religion) does not want to get involved, pressure from his wife, Tulita (Eva Longoria, a voice in “Arthur Christmas“), and others pushes him into action. With his brilliant military strategies, the ragtag army begins to develop discipline and turns the tide of battle (although it seems that the federal troops were getting stomped all over the place, even BEFORE Velarde showed up; they are as incompetent as the German pilots in “Red Tails“). 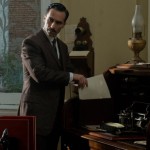 Subplots include a little boy, Joselito (Maurico Kuri, “La Leyenda del Tesoro”), joining the fight; and United States ambassador to Mexico, Dwight Morrow (Bruce Greenwood, “Thirteen Days“), trying to trade Calles machine guns for extension of oil rights. Kuri, at age 14, is one of the best things about the picture, as his emotional scenes with his parents and Father Christopher (a brief appearance by Peter O’ Toole, “Troy“) are heart-wrenching and horrifyingly real. He and Blades carry the thespian parts of For Greater Glory very well.

I wish I could say the same about most of the other acting work. Greenwood is always solid, as is Issac, but Garcia (with almost 90% of the screen time) goes from far too laid back to over-the-top. He gives — not one — but three fiery, inspirational speeches (one, on horseback before a battle, is stolen directly from “Braveheart,” even down to the underlying musical score from James Horner). Longoria does the best she can with what she has, but she like most of the others come across as just mouthing their lines or gesturing dramatically.

Be forewarned though — this is not a family film by ANY stretch of the imagination. There are shootings, stabbings, hangings (including one of a young boy), people being burned alive and a horrid (but short) torture sequence. For Greater Glory certainly earned its “R” rating — and then some.

The use of independent, religious-based funds shows most glaringly in the technical department, however. The editing is practically non-existent (leading to the 143 minute running time, which could have been trimmed by at least 40 minutes), and the choppy camera work, especially during the battle scenes, is almost unwatchable at times. Still, I cannot give this movie a total pass because it is a story worthy of more than the few that have heard of it. See it, if only for that reason. 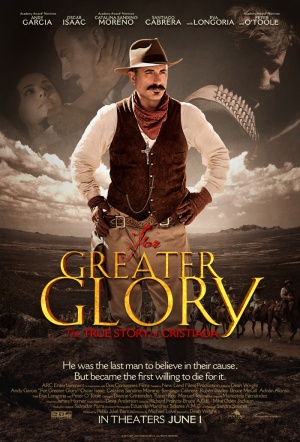