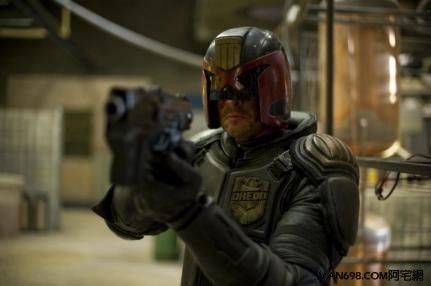 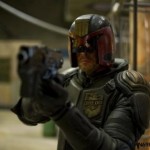 A perp is in trouble.

Created in 1977 by John Wagner and Carlos Ezquerra, Brit cult comic book character Judge Dredd was last seen on the big screen in 1995 for the Disney-produced, campy Sylvester Stallone vehicle simply titled “Judge Dredd.” Although the Stallone picture is fun in a “so bad it’s good” way, it was a total misfire, flopping at the box office and earning disdain from Dredd’s comic book creators. It took a while, but a group of filmmakers have finally endeavored to try again, and it’s a different beast entirely. Written by Alex Garland, 2012’s Dredd sticks closer to its source material, aiming for a grittier, darker depiction of Mega-City One and its most infamous Judge. Dredd is supremely entertaining and skillful, a kinetic action fiesta which manages to properly introduce Judge Dredd and his world in cinematic terms. This is 2012’s premiere action film — it’s easily on the same level as classic sci-fi masterpieces like “The Terminator” and “RoboCop.”

Judge Dredd (Urban) lives in a dystopian future where catastrophic wars have transformed Earth into a devastated wasteland. On the East Coast lies Mega-City One, a metropolis overrun by crime. Keeping crime under control are the judges: Law enforcement officials with the power to sentence and punish lawbreakers on the spot. One of the fiercest judges on the force, Dredd is assigned to assess the inexperienced Judge Anderson (Thirlby), a mutant with physic abilities. Dredd takes the rookie into the field, investigating a routine triple homicide at a towering city block known as Peach Trees. Unfortunately, the block is essentially run by brutal crime lord and drug kingpin Ma-Ma (Headey), and she is not willing to let the judges escape with their suspect. Locked inside the hostile block, Dredd and Anderson are left at the mercy of Ma-Ma, who manufactures the city’s supply of a new drug known as Slo-Mo. Ma-Ma calls upon the armed residents to kill the judges, stacking the deck against the pair who are in for the fight of their lives.

Working on a modest budget (reportedly $50 million), Garland and director Pete Travis (“Vantage Point“) lacked the resources to create an expansive adventure which truly explores Mega-City One. Instead, Dredd is a small-scale introductory escapade — outside of an opening chase scene and the sequences set within the Grand Hall of Justice, the film confines itself within the concrete interiors of Peach Trees. It’s a surprisingly effective way to re-introduce Dredd on the big screen, with the clean, simple storytelling allowing the viewer to properly acquaint themselves with the judges amid the action-oriented conflicts. We do not get to know Dredd on any profound level — that’s fundamentally the point — he’s a gruff judge with a steely work ethic; armchair psychology would betray the character (Anderson’s psychic reading of Dredd is cut off before she goes too deep). Fortunately, writer Alex Garland has managed to create a film rich in Judge Dredd lore that can be easily enjoyed by the uninitiated. It’s rich in detail and nuance too, leaving plenty of things to explore in the event of a sequel.

Comic book adaptations are often soft in terms of violence, but Judge Dredd is a character aimed more at adults. Thus, Dredd is a vehemently R-rated action film — director Travis never baulks from portraying the realities of this visceral, blood-soaked world. Dredd and Anderson are faced with scores of gangs, prompting the judges to spray the walls with the blood of their opponents. Holy shit, it’s awesome. The violence is necessary too, because the film needed to convey the extreme brutality of this world to allow us to understand why law enforcers like Judge Dredd are necessary. This also renders the 3-D photography thematically appropriate, as it thrusts the violence into our faces. The trailers for Dredd were admittedly underwhelming, but the reason for this becomes clear while watching the movie: All the best moments are too R-rated for green-band trailers. Most action films only contain a handful of short, sharp action beats which provoke a sense of giddy exhilaration; Dredd packs in at least ten or 15 of those moments. The film also displays a dark but welcome sense of humor. Travis does employ slow motion during various action beats, but this is because Dredd’s opponents are high on the Slo-Mo drug which makes their brain believe that time is passing at 1% its usual rate. This ingenious stylistic choice both serves the narrative and provides the chance for creative moments of slow motion awesomeness. 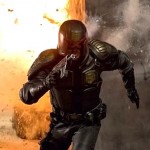 Let’s get this straight too: Karl Urban IS Judge Dredd. Period. Espousing a raspy voice, Urban inhabits the role with convincing abandon, washing away the bad memories of Sylvester Stallone’s attempt. Urban has the right look for the role, and he effectively conveys the manly brute force and the intimidating brutality of the iconic officer. This is the performance that Urban will be most remembered for, easily. Thankfully, the other performers are strong as well. Olivia Thirlby is both endearing and believable as Anderson, showing terrific nuance as she displays her uncertainty towards the violent force required to be a judge. Meanwhile, Lena Headey is an effective villain; scarred, vicious and ugly as whore-turned-drug-kingpin Ma-Ma.

Comparing Dredd with its ’90s counterpart, the difference is day and night. This envisioning absolutely nails it, making the Stallone version look like a woeful kiddie film. To be sure, the movie is as deep as a street puddle, but it didn’t need to be profound. Dredd was created by a writer who knows his source, and a director who knows his art. It’s a bad-ass action film, and an excellent start for a potential new franchise (which, unfortunately, may never materialize). 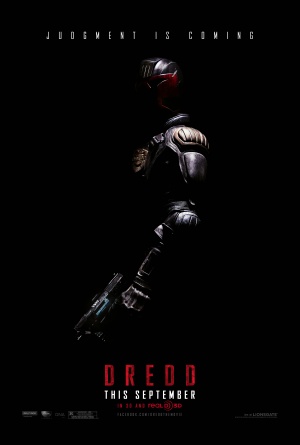