Half the fun of watching Fantastic Beasts and Where to Find Them, a prequel of sorts to the “Harry Potter” franchise, is trying to figure out just who will be a vital link to that amazingly popular film series. J.K. Rowling (the author of the original “Potter” books, as well as this screenplay) seeks, like, the “X-Men” film series, to create an origins story and then connect the dots (or in this realm of magical worlds, have the dots connect themselves) through its inevitable sequels (at least four of which are currently slated).

The question now is whether the viewers’ appetites will be whetted by these new adventures which seek to bring the very British “Potter” series to American shores. However, if the first weekend’s box office is any indication, $75 million is not a terrible start (it’s no typical “Potter” opening, slightly less than “Harry Potter and the Order of the Phoenix” and “Harry Potter and the Half-Blood Prince,” but enough to vault it past “Doctor Strange” and everything else last week). Much of that largess could be the hunger audience’s feel for a return to the fun and fantasy elements that allowed Rowling’s creation to earn more than $7 billion worldwide to become the most successful movie group of all-time.

Does Fantastic Beasts and Where to Find Them live up to this pedigree?

Well, it depends on the viewer, but for this critic’s money, it’s a yes and a no. We will get to the positive aspects first. The picture looks well, fantastic. It begins as Newt Scamander (Eddie Redmayne, Academy Award winner for “The Theory of Everything” and nominated last year for “The Danish Girl”) arrives in New York City in 1926. Thanks to its cinematography (Philippe Rousselot, “Sherlock Holmes: A Game of Shadows”), art direction (David Allday, “The Man from U.N.C.L.E.”) and production design (Stuart Craig, the entire “Potter” library), the Big Apple has never looked better. As a student of history, I appreciated the costumes, automobiles, storefronts, streets and buildings of this era. Simply put, the period detail is terrific.

After checking in at U.S. Customs which a very suspicious suitcase, Newt bumps into the portly Jacob Kowalski (Dan Fogler, “Take Me Home Tonight”). During all of this, a small platypus-like creature escapes and begins causing all sorts of havoc (humorous and otherwise) in a nearby banking institution. This, of course, is one of the fantastic beasts you might have seen (and expected) in the title.

It turns out that the secret world of wizards, warlocks and witches we grew to love — and fear — in “Harry Potter” installments is alive and well in pre-Depression NYC as is their never-ending effort to stay away from the regular humans (or “No-Maj,” the Americanized word for “muggles”) to avoid an all-out war between the two groups (although it really wouldn’t be much of a conflict, though, would it?). By a plot convenience accident, however, Newt and Jacob are now thrown together as well as the wizard sisters, Tina (Katherine Waterston, “Inherent Vice”) and Goldie Goldstien (Alison Sudol, “Other People’s Children”) to try and capture the various CGI creations from bird-like snakes (or snake-like birds), giant flying semi-dragons, huge dung beetles and a dark foreboding mass reminiscent of the smog creatures in “Green Lantern” and “Fantastic Four: Rise of the Silver Surfer.” And while the weird animals are mostly cute and cuddly and all, it’s that last entity which is causing much destruction an upheaval throughout the metropolis.

Pursuing this foursome is the entire wizard coalition, ruled by Seraphina Picquery (Carmen Ejogo, “Selma”) and personified by the powerful Percival Graves (Colin Farrell, “The Lobster”). Also in the mix is a proselytizing anti-magic crusader (Jenn Murray, “Brooklyn”) and one of her bizarre minions, Credence (Ezra Miller, “The Perks of Being a Wallflower”). And we cannot forget New York newspaper magnate Shaw (Jon Voight, “Getaway” and an Oscar winner for “Coming Home”) as a major supporting character.

These sequences, with wild and unpredictable monsters swarming about, untold destruction of the city and a dark, spectral mass circulating all over the screen, the animation and technology threatens to overwhelm the viewer — and often times does. The “Potter” films had its fair share of these scenes, but the story and character development (as well as our genuine feelings for them) provided the necessary balance. Here, we are not invested in the roles enough to really care one way or another (at least not yet).

As such, Fantastic Beasts and Where to Find Them, while often fun to watch, does not translate into a completely enjoyable experience. Director David Yates, coming off the bomb that was “The Legend of Tarzan,” does a workmanlike job, but he is burdened somewhat by Rowlings’ uber fantasy script, which, despite a very big twist at the conclusion, can be almost too fantastic for its own good.

'Movie Review: Fantastic Beasts and Where to Find Them (2016)' have 6 comments 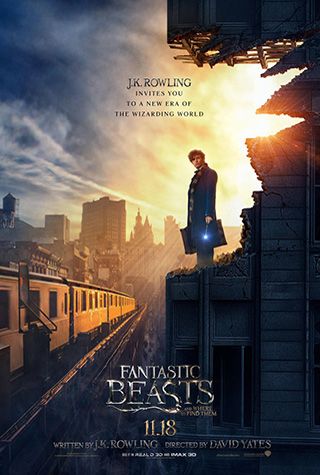 Fantastic Beasts and Where to Find Them (2016)

Home » Reviews » Movie Review: Fantastic Beasts and Where to Find Them (2016)