In the past calendar year (or thereabouts), there have been at least four major boxing films, “Creed,” “Southpaw,” “Hands of Stone” and now Bleed for This. Written and directed by Ben Younger (“Prime”), his first effort in more than a decade, and produced by Martin Scorsese, it tells the story of Vinny Pazienza, professional boxer who held world titles in the lightweight, light middleweight and super middleweight divisions. Unlike most pugilistic productions, however, there is really no backstory here as Vinny, played by Miles Teller (so bad in “21 and Over,” but who acquitted himself very well in “Whiplash”), is simply presented as cocky, showboating and brimming with trash talk (in fact, he makes Muhammad Ali sound like Mother Teresa). The movie begins in 1988, after he had already won (and lost) the IBF World Lightweight title to Greg Haugen and was now going up against WBC Light Welterweight champion Roger Mayweather.

Having trouble making weight, he is seen in a hotel room covered in Saran Wrap riding a bicycle in an effort to sweat off the excess poundage. He is pounded into submission and is also hospitalized for severe dehydration, forcing his manager to quit.

He then chooses a new manager, the boozing Kevin Rooney (Aaron Eckhart, “Sully”), who guided Mike Tyson during his early years. Despite disagreements between Rooney and Vinny’s father, Angelo (an almost unrecognizable Ciarán Hinds, “Hitman: Agent 47”), he receives a shot at the WBA World Light Middleweight Title and is successful in defeating the French champion, Gilbert Dele, with a TKO (technical knockout) in the 12th round.

With this victory, Pazienza became the second fighter in boxing history to win both the lightweight and junior middleweight world championships. Pazienza was considered the underdog going into the fight, but delivered what many believe was the finest performance of his career.

Shortly after winning this world championship, however, Pazienza was forced to relinquish the crown due to a serious car accident in which his neck was broken. This scene is brief, but violent, like a real auto crash would be, but it sets up Vinny’s greatest challenge. Doctors inform him he might never walk again and would certainly never fight again, but he refuses fusion surgery and to take no for an answer. Pazienza, instead chose to wear a medical device called a Halo (a circular metal brace screwed into the skull in four spots and propped up with four metal rods) for three months in order to heal the injury. During this time, disobeying the doctors’ orders as well as his own father’s wishes, he maintained an intense workout regime (what’s new?).

During these sequences, we get to see the second training montage (the first was when he moved up in weight class to take on Dele) of Bleed for This, which includes several unintentionally funny moments where he bumps the neck device on a car door and a barbell, respectively. We also see how his greedy management team of Lou (Ted Levine, “Shutter Island,” but probably best known as the cross-dressing serial killer Buffalo Bill in “The Silence Of the Lambs”) and Dan Duva (Jordan Gelber, “Before the Devil Knows You’re Dead”), struggle to get him a fight after his recuperation. Even his sparring partners refuse to get in the ring with him, fearing that one punch may cripple him for life. During these times, he is also supported by his mother, Louise (Katey Sagal, “Pitch Perfect 2,” but forever known as Peg Bundy on “Married with Children”), a wise-cracking sister and a dullard of a brother-in-law.

Finally, he gets the chance to take on champion Roberto Duran (the subject of “Hands Of Stone”), for a million dollar payday. Okay, for truth’s sake, Vinny had already made his near-miraculous comeback much earlier in real life, defeating future WBC Light Middleweight Champion Luis Santana via a 10-round decision. It was not until several bouts later that he actually faced Duran.

As for the portrayals, Teller (who, incidentally, looks nothing like a real boxer), Eckhart and Hinds are fine and mostly believable in their roles (especially the first two), but this author cannot help but speculate that this real-life struggle and redemption story could have been told much better with some genuine emotion instead of the mediocre tale we see on the screen. Fans of the sport and the film genre may desire a “Raging Bull” or “The Fighter” type of knockout here with Bleed for This, but will have to settle for a mere split decision. 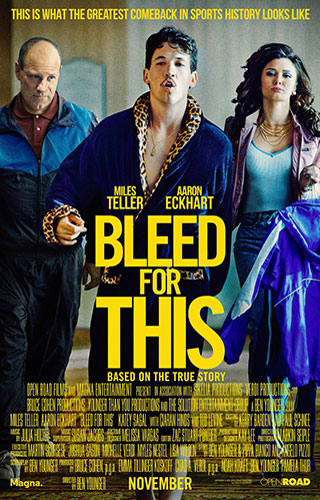