Just a week or so ago, I reviewed the movie “I Could Never be Your Woman.” At the end of the review I mentioned I didn’t think any good romantic comedies were on the horizon. Well, guess what. I was wrong. One has indeed popped up and slapped me in the face. I’m not exactly happy about being wrong, but I’m willing to take my lumps.

No Reservations is a remake of a 2001, German movie titled “Bella Martha.” It’s a story about an executive chef named Kate (Catherine Zeta-Jones). Her life is wholly consumed with her job and runs her kitchen at a posh Manhattan restaurant like a lion (unfortunately, not as lion-like as Gordon Ramsay from the television show “Hell’s Kitchen”). Her portioned life is turned upside down and every other way imaginable when she has to assume the parenting duties of her niece, Zoe (Abigail Breslin). Things get further complicated when the restaurant brings in another top chef Nick (Aaron Eckhart) to fill in for Kate while she deals with her family problems.

No Reservations isn’t exactly breaking new ground here — I don’t think it is possible for a romantic-comedy-drama to do that anymore. So it’s no surprise that clichés abound. Of course we expect Kate to loosen her belt, warm up and reach out to people at some point in movie. It wouldn’t be a romance if she didn’t fall for the guy she had so much initial angst towards either. And of course there is always the obligatory “everything is going to work out in the end” scene with the main characters when they finally realize and accept what they have to do for things to work out.

Even so, the movie is a joy to watch. Catherine Zeta-Jones still has it. I figured her a lost cause when she started popping out babies with her geriatric husband, Michael Douglas. She may be getting a tad long in the tooth (old) but she still carries herself like a show horse — tall and proud. She covers every element of human emotion (at least all the ones I could think of): fear of losing herself; falling in love; despair for her niece; anger and frustration at things she can’t control. All in all, a very good showing by her. What I especially liked, was the heartfelt performance by Abigail Breslin. She has once again raised her game to another level (she was nominated for an Oscar for her role in “Little Miss Sunshine”). It may be because I too am getting old but I truly felt sorry for her character. I kept thinking about how my children would react under similar circumstances. So long as this young girl keeps her head on straight (no Lohan moments), I can see her doing some great things.

So now I can officially say that I seriously doubt any better romance, self discovery type of movies will be stepping up to the plate this year. No Reservations is as close to a perfect dish as you’ll find. The chemistry between Jones and Eckhart is refreshing. The story is well told. It’s a great movie to take your significant other to see. Just don’t go to see it with an empty stomach. 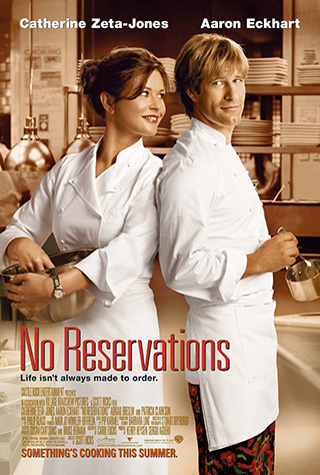