Werewolves seem to be enjoying a resurgence. The “Underworld” series and to a lesser extent, movies like “Blood and Chocolate” has made them cool again. And as of late there certainly appears to be a lot of buzz about Skinwalkers. I’m not entirely sure why, but whatever the reason, it was enough to pique my interest in it.

After viewing, I’ve come to the conclusion that werewolves is all Skinwalkers has going for it. The concept of warring werewolf clans is the only good aspect of this movie. It should have opened up a world of great possibilities — extreme violence and bloodshed, and phenomenal effects come to mind. Sadly, no one told that to the writers (James DeMonaco, Todd Harthan and James Roday) or the producers (Dennis Berardi, Don Carmody) because there isn’t a single drop of excitement in this product.

I’ll start with the writing. Jonas (Elias Koteas, “Zodiac”) is the leader of a group of werewolves that see their affliction as a curse. The cure is locked within a boy, Timothy (Matthew Knight, “The Grudge 2”) that they are protecting. Upon his thirteenth birthday, he’ll be able to set them free from their hell. Varek (Jason Behr, “Man of God”) and his merry men and women are on the other end of the spectrum. They relish in the hunt and slaughter of humans on the full moon. They don’t want their gift taken away, so naturally they want the boy dead. Pretty basic premise but it could still be cool. All hope is dashed quickly though due to terrible dialogue, confusing flashbacks meant to piece in a back story and a completely haphazard way of having the movie unfold.

Now onto the acting. It’s bad. It makes the writing woes even more glaring. Sometimes good acting can hide shitty writing. Not here. Rhona Mitra (“Shooter”), who plays the boys mother Rachel, is supposed to be an up and coming actress. She’s set herself back light-years with this performance. Completely unanimated. Her character has been told lies by everyone around her, monsters are trying to kill her child and yet she takes it all in stride. What’s scary though is she is actually the best of the bunch. Everyone else just seems to be doing as little as possible — just enough to earn their paychecks. Which leads me to the biggest letdown.

Absolutely no effects. Nada. The financiers of Skinwalkers must have lost all their money at the craps table before cutting a check for this movie. Here’s how cheap they were. No extras in the film. Each town our heroes go to is void of people. Hell, they go into a hospital and it has tops 15 people in it (and I’m being gracious with that number). I know hundreds of people that would piss all over themselves to be an extra in a film. No money needed. The biggest letdown was the cheesy transformations. Tired film tricks like superimposing film frames over one another are used to show the changeovers. I’ve seen better morphing on animated website icons. And when it was all done it looked like the make-up artists slapped some prosthetics and hair on the actors faces and jammed 10-cent Halloween fangs in their mouths. This is 2007 people, the effects in “An American Werewolf in London,” made 26 years ago, should not be 100-times better.

Needless to say, Skinwalkers is definitely a movie to skip. That is of course, unless you actually want to see for yourself how bad this movie really is. If that’s the case, have at it. Then after watching it, I’d recommend seeing “Bloodlines.” When you’re finished you can tell me which of the two was worse. 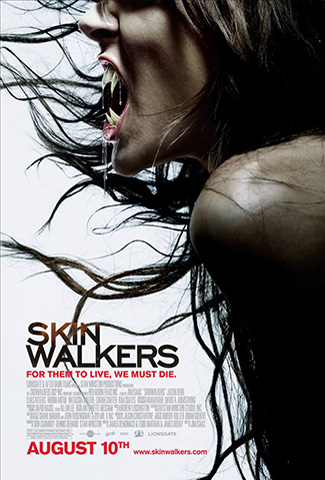