It’s just one of those weeks. I don’t have much interest in going to the theaters to watch anything. If only I were important enough to get screeners to the summer blockbusters. Instead, I get access to the bottom of the barrel flicks — flicks like Bloodlines. I guess I can’t complain though, I managed to watch this in the comfort of my recliner with a cold brew in my hands. Apparently it’s the only way to actually watch this movie; to watch it any other way would be a crime against humanity.

And why you ask, would I put Bloodlines on the same shelf as someone like Slobodan Miloševi?? Because I’m in a particularly bad mood after watching this movie. I’m a big fan of independent films that give a shot to up and coming writers, directors and actors, but I’m a bigger fan of movies made right. Unfortunately, Bloodlines doesn’t even come close to getting it right. Here’s why, in the order of importance.

That being said, I was actually impressed with the concept and some of the ideas put forth in Bloodlines. Yes, I know the overall concept of backwoods folks needing to rejuvenate their genealogy due to widespread inbreeding isn’t wildly original (see “The Hills Have Eyes II”), but it’s still an interesting premise. What I especially liked was the female fight pit, setting girl against girl in a survival of the fittest battle. After all, it is important to breed with the strongest of the species. I’m also a fan of presenting a myriad of ways to inflict harm to people. Bloodlines comes up a few creative ways to use arrows and deer antlers as weapons.

From a personal standpoint, I would have liked to see more focus on the deranged Hackford family. What made them tick and how did they get to their situation? Also, the movie needed to be much more graphic to put it over the top. More gruesome deaths and perhaps a brutal rape or two come to mind — the possibilities are practically endless. For a B-grade horror flick with a very limited budget, Bloodlines does well enough to entertain, yet it could have been so much more. Proceed with low expectations. 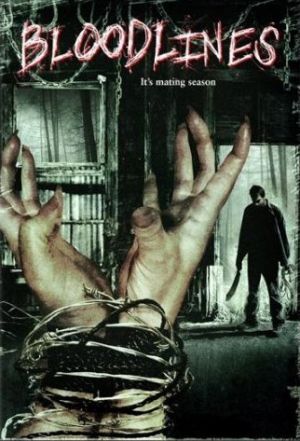