It’s been a long time — 16 years to be precise — since the high water mark was set so high by “The Silence of the Lambs” for serial killer thrillers. And in those 16 years, there has yet to be a movie that even comes close to surpassing it. So it is fair to say I didn’t have my hopes set so high when I finally got off of my ass to see Mr. Brooks.

Kevin Costner plays Earl Brooks a highly successful businessman with a dark — a very dark secret. That secret, predictably, is he enjoys killing people. And after a two year hiatus, he gives in to his more sinister side and once again the “Thumbprint Killer” strikes again. Only this time, he’s gotten sloppy and left a witness. That person, Mr. Smith (Dane Cook, “Employee of the Month ”), reaches out to him — not for money — but to join him on his next assault. All the while, diligently pursuing Brooks is the very sexy detective Tracy Atwood (Demi Moore). Sprinkled throughout the movie are subplots involving Atwood’s nasty divorce, a released inmate, Thorton Meeks (Matt Schulze) hell-bent on revenge and Brooks’ daughter Jane’s (Danielle Panabaker) own demons.

As I had expected, I couldn’t find any major flaws (or any superlatives) in the way Kevin Costner portrayed the outwardly meek, quiet Mr. Brooks. A great deal of Brook’s communication is done through his eyes and through his body language. Costner didn’t have far to stretch — he has the eyes and mannerisms of someone you need to keep an eye out for. What was unexpected, and the only reason Mr. Brooks is remotely entertaining is watching the inner dialogue Earl has with his other personality Marshall (William Hurt, “The Good Shepherd”). Marshall is the dark, cruel side that yearns for the kill thrill. He is extremely calculating and exacting; always thinking things through and focusing on the effects of any actions. Hurt’s unemotional, flat delivery is the perfect contrast to Costner’s nervous, pathetic half.

Other than Hurt’s performance, there is little that makes Mr. Brooks remarkable. Much of story is dragged in forty different directions which I found rather irritating. Of what worth was it to focus so much energy on the divorce proceedings of Demi Moore’s character? It certainly didn’t add anything of vital importance. I again asked myself the same question when presented with Jane’s dilemma. Was it spliced into the film to show that a serial killer can be compassionate about his family? Was any of it really necessary?

Anyways, for me Mr. Brooks left a lot to be desired. I would have preferred it if the movie focused more on the inner turmoil that Brooks continually battles with rather than seeing so much frivolous shit jammed into the movie as filler. The movie would have certainly flowed better and would have provided to me a much better viewing experience. It’s a shame to see something with so much promise fail miserably. As it stands now, Mr. Brooks is a misguided psychological thriller with little thrill. Ho hum. 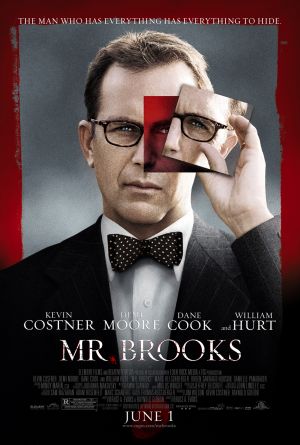