Ah, just what the doctor ordered. Another excuse to watch our favorite buxom blonde, Jessica Simpson, try to do something else she has no right to do. That’s right boys and girls, I mean acting. After all we already know she can’t sing or dance. Employee of the Month is aware of her shortcomings, so producers hope we’ll tune in just to see how good she looks. Being the man that I am — I’ll bite.

And what an asshole I am for it. I should have known the old bait and switch routine was in play. Ms. Simpson has a minor role — so all hopes of watching her tits throughout the movie were for naught. What works for the movie is comedy of Dane Cook (awesomely funny stand-up routines) and our favorite alum from “Punk’d,” Dax Shepard. Dane plays Zack a freeloading, skate-through-life, box boy who, because of utterly shallow reasons (wants to fuck Simpson), decides to become a model employee and man. On the other side of the fence Dax plays Vince, an extreme asshole head cashier who makes it his goal to win employee of the month every month and throw it in the face of all his co-workers. The barbs thrown between the two of these guys who take themselves too seriously at their deadend jobs (Vince actually thinks he has something good going) is at many times funny. Rounding out the burnouts without much luck are Andy Dick (how can’t you love him?) and Harland Williams (best work, “Sorority Boys”).

Unfortunately, the comedy jousting between Cook and Shepard isn’t enough to hold this ship afloat. The additions of Dick and Williams barely adds a life vest to this Titanic. The plot inconsistencies are too numerous to count. What I had hoped for was akin to “Office Space” with a hot chick (not much into Jennifer Aniston), but instead got a comedy that doesn’t get enough laughs and sure as shit doesn’t show enough of Simpson’s skin. Employee of the Month can be safely skipped without damage to ones’ psyche. 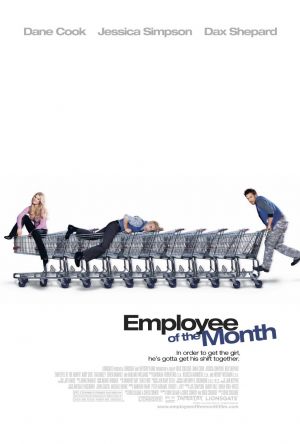