There are many individuals in this great big world of ours that I just don’t get. Those tree-hugging, liberal faggots; those war-mongering right-wing douchebags; folk singers; those fuckwad animal conservatory guys on the Discovery Channel, et al. People I really don’t understand are those fucking insane thrill seekers who will literally do anything for a laugh or a world record. Jackass Number Two is the second installment of those crazy fuckers (Johnny Knoxville, Bam Margera, Steve-O, among others) who are so stupid they don’t even realize it!

So why watch a movie that I know doesn’t have a plot and isn’t going to give me any insight into their mentality? Simple — I, just like everyone else, love to watch train wrecks. All of us at heart are fucking rubberneckers. We slow traffic to a crawl in the opposite direction of an accident hoping to see a dismembered body. Society is a sick motherfucker!

In Jackass Number Two we are offered dumber, more grotesque and more outrageous stunts as its’ predecessor. On the dumber side we’ve got people branding themselves and piercing their faces with fish hooks. On the gross side we have people drinking horse semen and eating dried bullshit. It’s the outrageous “stunts” that I want to see. Holding onto a rocket a second time after the first firing goes awry is crazy. Blindfolding oneself while a full grown yak charges is even crazier. Holding onto a fire hose 30 feet in the air while it is pressurized is priceless.

There can be no doubt that this movie is entertaining. While it’s real draw is watching it in a theater where people feed off of the atmosphere, you will find yourself shouting out loud watching it alone as well. I certainly don’t advocate doing any of these fucked up activities, however, it is a pleasure to watch others get rich risking their lives for no other reason than having a few too few brain cells. I don’t understand these nitwits, but I’ll gladly watch them eviscerate themselves in “Jackass Number Forty-Two” when it hits theaters. I reckon you’ll be there too. 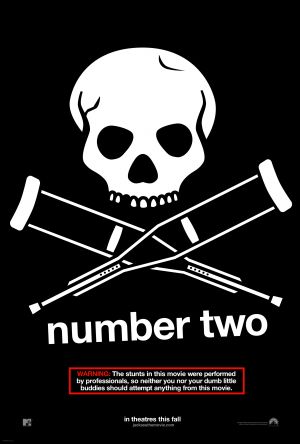