Well, I guess it’s time to see what the Hollywood hype machine has been pushing down my throat for months now. Norbit is a movie that lays out the life of a puny, pussy-whipped guy and his fat-as-fuck, overbearing wife. It is the latest Eddie Murphy comedy, in which, you guessed it — he plays most of the main characters. Seems he can’t get enough of the star billing after he realized he can put himself in a fat suit and act in front of green screen (see “The Nutty Professor”).

So let’s see, fat, sloppy people are funny. Emasculated, hen pecked men are funny too. Throw in a Chinese guy who can’t speak English (Engrish?) and a few brightly dressed pimps and don’t you know it — we’ve got a blockbuster on our hands! Awesome! Yeah, right. On paper it sure looks good, but alas, it ain’t that easy.

Norbit has absolutely no strength. The jokes are old and have been done better in 100’s of movies. Hell, even the fart jokes fall with a thud. Now, I’m left trying to figure out where it’s all gone horribly wrong. My best guess, is simply Eddie Murphy playing all the parts is snore. Just because you can do it, doesn’t mean you should. I don’t care that he can try and play the parts of three people — three parts that have been done better by others. A better guy in a fat bitch suit was played by Martin Lawrence in “Big Momma’s House.” The pushover guy who talks with a lisp and comes of age is done infinitely better by Adam Sandler in “The Waterboy” and to find a funny Chinese guy who can’t speak a lick of English, just watch any Jackie Chan movie (you’ll get some good action too).

I can’t find much good to say about Norbit — God knows I would like to find something, hell anything to say in a positive light. Even his love interest is an unattractive, skinny, little skeleton (Thandie Newton). Isn’t this a black movie? Bitches are supposed to have some meat on their bones — no self respecting black guy would accept this injustice. What it proves is Mr. Murphy has transcended the color barrier because it’s clear it’s white people going to see the movie in the theaters. Stupid white people.

It also proves the Hollywood marketing machine can work wonders. Even I thought, after seeing teasers and trailers, that Norbit was going to make me piss my pants like a schoolgirl. But guess what — my pants are dry. Bone dry. Another letdown in what I suspect is going to be banner year for shit packaged with a ribbon. 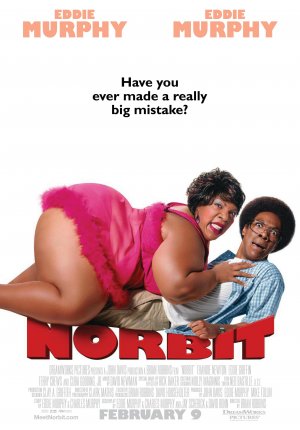