All Hell Breaks Loose opens like so many other movies; a group of friends pounding beers, making out, and blasting rock music around a bonfire in the woods. Within minutes, however, this modern grindhouse flick becomes unlike anything you’ve ever seen. A gang of menacing bikers rolls up, tattooed and black bandana-ed and trailing a casket behind one of their motorcycles. The bikers make short work of the camping crew, though not in the order nor for the reasons seasoned horror fans would expect.

The gang is called Satan’s Sinners, and their mission is to find a virgin to bring back to hell to become the devil’s concubine. One of my few grievances with this film was how little that arrangement (how did these men become part of Satan’s Sinners? What are the rules of this universe’s hell? How long and how frequently has this been going on? etc.) was explained. It hardly matters, though. With a captive in the casket and their eerie evil eyes hidden behind their shining sunglasses, the Sinners head out in search of a place to post up at until such time as their satanic ritual can be completed.

Meanwhile, a happy young couple (Nick Forrest and Sarah Kobel Marquette) elopes with the help of a drunken and perverted priest at a church nearby. When another gang of Sinners intercepts them, and the ill-fated groom has a series of strange and unexpected meetings with God himself, all hell truly does break loose, and tons of vulgar, gory, b-movie fun is had by all.

If you go into this movie prepared to take it as seriously as it takes itself (read: Hardly at all), you’ll be in for a great time. Standout lines include one of Satan’s Sinners, in response to a bartender telling him to get the hell out of his establishment, saying, “See that’s your problem, mister. Hell’s already out, and you’re looking at it.” Others, like “Hell, for all I know you spend your evenings raping bunnies in the woods!” don’t land quite as well. But the great practical effects, intentional use of cartoony carnage, charged imagery like a woman in a blood stained wedding dress chained to the back of a bike, and a genre appropriate reference to “The Town That Dreaded Sundown” make All Hell Breaks Loose a great ride either way.

Aside from some unnecessary unpleasantness (there’s just not much funny about God and a pervy priest making a deal that involves 20-30 “rich, big titty housewives”), the aforementioned lack of exposition, and a huge pacing problem that starts at about the forty minute mark, All Hell Breaks Loose is just self-aware enough to transcend the threshold from bad to so bad it’s good. If you can simply accept this and roll with it, like a resurrected man accepting a roll of duct tape, a gun, and a mission to save his wife from a mysterious white-clad stranger, then you’re in for one hell of a good time.

'Movie Review: All Hell Breaks Loose (2014)' has no comments 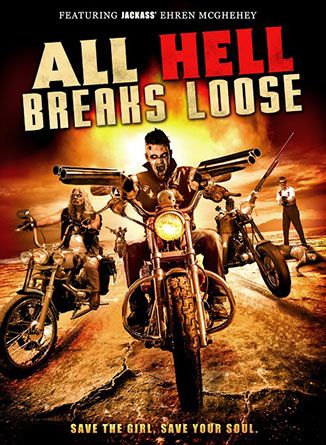