Finding fantastic art that captures your amazement can be an exhilarating experience. So many thoughts will sprint through your mind as you try to figure out how and why a magnificent piece of work came to be. But sometimes, we don’t have to be alone in that process. We often share things that are fascinating and hope other people will agree with us. As a popular art form, movies are a shining example of this situation.

Although, when great praise and criticism comes from the same movie, it becomes incredibly intriguing. Stories that polarize are good because it forces us to examine this loaded question:

In a span of forty-three years, acclaimed filmmaker Terrence Malick (“To the Wonder”) has personally written and directed seven movies. For some hardcore cinema consumers, a Malick film is an epic event that must be savored because you don’t know when the next one is coming (fortunately for them, three of those seven movies have dropped in the past five years). If Malick had also made a few short films in between, you could make the argument that he’s the “Drake” of the independent film scene.

But hey, no one’s trying to make crazy entertainment career comparisons. His latest, Knight of Cups, is about a Hollywood screenwriter named Rick who’s on a huge quest for true love and personal identity. Knight of Cups is also a phrase that refers to a tarot card, which shows a passionate explorer who’s steered by his own emotions. So how does Malick choose to guide us through this thought-provoking voyage?

Stylistically, the story navigates itself in a similar fashion like “The Tree of Life” and the aforementioned “To the Wonder.” As we enter Rick’s life, we see his highs and lows and meet the people closest to him. He is quietly played by Christian Bale (“The Big Short”), which somewhat feels like a contradiction since many of his recent characters possess an undeniably dominant persona.

For this film, it is not Bale’s boisterous vibrato, but his actions that do the speaking. Rick is often supported or opposed by the likes of Natalie Portman (“Thor: The Dark World”), Cate Blanchett (“Carol”) and Brian Dennehy (“The Big Year”). I could go with more names that will make you exclaim, “Wait! They’re in this, too?!” But as talented and famous as this cast is, they were unable to enrich the story with a memorable presence. Although, there were elements in its production that tried to fill that void.

Each scene is visually fragmented, fleeting and sprawling as the camera glides around each rambling person, a signature technique that Malick calls “torpedoing.” It’s a distinguished style of filmmaking that’s illuminated by the extremely gifted cinematographer Emmanuel Lubezki (now a three-time Oscar winner, most recently for “The Revenant”). However, its cinematic scope isn’t aiming to blow your mind in the way Lubezki’s most recent films have. With this tale, the scale is much more contained yet filled with Malick’s other trademarks: Cross-cuts of tight close-ups, and sweeping wide shots.

Ultimately, what this story tries to give us is a man who wants to go forward in a new way. However, he’s unfortunately trapped in a cycle of enticing escapades. Now, while it’s not as suspenseful as it may seem, it’s Rick’s life that we’re meant to connect with. With that in mind, the easiest way to comprehend this film is to see what’s on the surface. But what audience will ever feel sorry for a seemingly successful man who’s surrounded by sexy women? Honestly, if you were to retitle this movie, I think “The Wolf of Los Angeles and Las Vegas” would be an excellent fit. Even with the film’s study on Rick’s compulsions, I walked out of the theater unaffected by what I saw.

I can usually empathize with a character in a dilemma. But it’s harder to care for a character and a narrative that seems to be expressing deeper yet unclear messages. It would be one thing if the film were open to interpretation: A filmmaker creates a piece of abstract expressionism and then allows the audience to generate their own meaning and thematic resonance for that film. But what Malick has made seems too intentional to be that open-ended.

Basically, the only way to fully understand Knight of Cups (and virtually every Malick film for that matter) is if you speak with director himself (who is notoriously shy about giving interviews anyway so good luck). Sure, it’s possible that after some research on the film’s allegorical content, I could appreciate the film better in repeated viewings. However, I’m a firm believer that a great story will always be executed in a great way. It doesn’t always have to make me laugh, cry or understand the universe. But at the very least, it must keep me engaged.

And all I can do is be honest with the piece of art that I was presented . . . and what I witnessed was: A sea of people mumbling and walking around in circles for two hours. Without a doubt, this is a competently made cinematic exercise. An endeavor like this is very brave to attempt and even perfect. But its massive side-effect of tedium cannot be ignored. Even though I purposely went into Knight of Cups blind to what I was about to encounter, I wasn’t surprised by its style . . . just my apathy towards it.

However, if you’re a huge Malick fan or an art-house movie lover, you’ll probably think I’m super nuts — with a capital “N.” Also, I’m totally aware that this film is not targeted for mainstream audiences despite having prominent stars (which also includes Antonio Banderas, “The 33” and Imogen Poots, “Need for Speed”). Without doing prior research on Knight of Cups, Malick himself, or studiously watching his other movies, I doubt many casual film fans (and even some sophisticated ones) will love what they see . . . unless they like to watch films just to stare at some random movie stars. 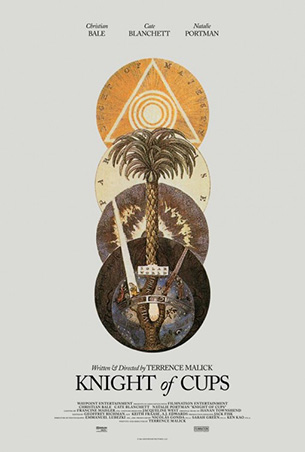