Who, in their right mind, would have thought a film about the enthusiasm for the frankly boring occupation of birdwatching would make for such a fun experience? Apparently 20th Century Fox did, as their newest release, The Big Year, while not drop dead hilarious, is nonetheless a very decent time at the cinemaplex.

Evidently, for those of us not in know, the title refers to a contest in which hundreds (or maybe even thousands) of people compete to see who can view the most species of birds in a calendar year. And while most of the movie expounds the virtues of this endeavor, the ultimate message is that those who devote too much time to it can lose much more than they could ever gain. It’s a serio-comic message that doesn’t preach . . . too much.

This activity can take the participant to all parts of the globe and it makes one wonder just how they could afford such an enterprise. Well, for the purpose of The Big Year, the three main characters — Kenny Bostick (Owen Wilson), Stu Preissler (Steve Martin) and Brad Harris (Jack Black) — can certainly afford to take an entire 12 months off work to chase these feathered creatures from Alaska to Texas. Bostick, a well-to-do contractor, and Preissler, a wealthy corporate magnate, are logically able to finance such a trip, while nuclear plant worker Harris (think a live action Homer Simpson) has to scrounge money from his working class parents (Dianne Wiest and Brian Dennehy).

In addition to having a beautiful but neglected wife, Jessica (Rosamund Pike, “An Education“), Bostick is the world record holder with over 700 birds spotted to his credit. The other two know they have their work cut out for them — and will not even admit that they are going for the “big year.” In a series of betrayals and strategies, the trio does its best to outsmart each other, while family and personal problems threaten to interfere with the contest, and at times, that almost happens.

Thank goodness, the film comes to its senses and veers back into the flock viewing, which features a series of eccentric supporting characters and some interesting locales. Directed by David Frankel (“Marley & Me” and “The Devil Wears Prada”), this picture balances the subjects on a fine wire.

Sometimes it succeeds, while other times it just misses its mark. Not enough, however, to keep The Big Year from being one of the few original stories to come out of Hollywood in the year of the remake. 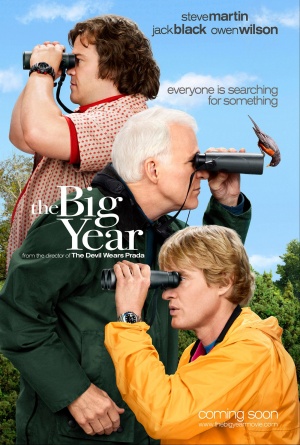