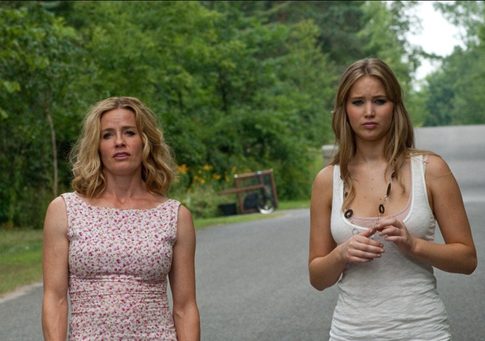 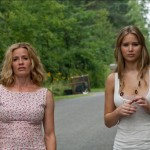 Tough day for the girls.

Spooky house horror has had a fairly decent and crisply creepy cinematic run so far this year. We’ve had a “Silent House” and an old isolated one that played home to “The Woman in Black” and now we have the geographically accurate House at the End of the Street. For this latest hunk of house horror, the title is both clearly specific and oddly enigmatic. So there’s a street and there’s a house at the end of it and it’s bad. That’s clear, but the extent of its badness is a knotted mystery just begging to be unraveled. So along come single mom Sarah (Elisabeth Shue) and her guitar-strumming daughter Elissa (Jennifer Lawrence), who move into a house that’s also at the end of the street, but isn’t actually the house of the title. Their house is ruggedly beautiful, while the titular house has to make do with its chilling reputation as the place where a young girl murdered her parents in cold blood several years ago. That’s a whole lot of badness for one house, but it’s not enough to stop Elissa from showing an interest in the place and us from searching out a few good jolts.

The jolts come every now and then in raucous fashion thanks to claustrophobic camerawork that suggests director Mark Tonderai is pretty competent when it comes to staging fright sequences. He’s not too imaginative in other areas, though. Plenty of cheap, cheesy lighting and editing techniques are painfully employed to give us recycled visions of flashbacks and a bustling teen party. It’s all very derivative and silly, but then Tonderai gets ready to scare us and the camera closes in on its human targets, forcing their faces to fill the frame in helpless fashion. The mostly handheld close-ups are used so often that Tonderai conjures claustrophobia at will and even succeeds at crafting a considerably uncomfortable experience at times.

Most of the scares are of the jump variety, so when it’s time for someone to leap into the frame, the tight shots leave little room for us to envision an escape. The attacks are quick and brutal, visceral qualities that Tonderai uses to his advantage. I always appreciate seeing a filmmaker use the camera to constrict our spatial awareness to the point that the screen in front of us becomes an inescapable box of fear. So even though Tonderai is working from a pretty silly script by David Loucka (lately absent filmmaker Jonathan Mostow receives a “story” credit), his success with intensely close photography gives House at the End of the Street some impressive features in terms of construction.

Those features don’t excuse the obvious, transparent script, though. The story borrows heavily from other horror entries and the twist is just a pretty predictable rip-off of one of the genre’s most iconic shocks. The tropes are all here on dutiful display and little effort is made to unearth any originality in the midst of the actual plot. Elissa quickly blows off popular douchebag Tyler (Nolan Gerard Funk) and then falls for introverted weirdo Ryan (Max Thieriot), who isn’t your average neighbor, unless potentially traumatized lone survivors of family tragedies just so happen to be all over your block. Plenty of foreshadowing follows and the House at the End of the Street just dares us to not figure out its big mystery before the truth is revealed. It’s not much of a dare, though.

The house itself is clearly hiding something. To ensure we don’t miss this, it’s revealed relatively early on that the titular house even has a basement for its basement. Double the dark, dingy areas for an innocent young woman to wander down into! It’s also double the dark, dingy areas for a curious policeman to wander down into, which is a bummer for Gil Bellows’ friendly character, since cops in horror movies are often do-gooders who simply can’t manage to do any good.

None of the characters quite escape their archetypal molds, but Jennifer Lawrence still manages to turn in a performance that’s strong enough to empower Elissa even as she’s going through the motions in standard horror movie situations. Lawrence imbues Elissa with some genuine smarts, so when the protagonist finds herself in one of those tough situations that are staples of the genre, she often makes good decisions that feel relatively sensible in context. Sure, Elissa may stick around the creepy house a little too long after it begins to dawn on her that something is horribly awry, but for the most part, she doesn’t make it easy for the villain. An inventive escape tactic used at one point is another sign of the character’s intelligence and resourcefulness. 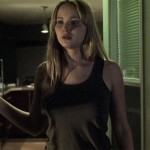 Lawrence has been cinematically ubiquitous of late and it’s sort of odd to see her play the lead in a somewhat generic little horror movie after she’s already been nominated for an Oscar (“Winter’s Bone“), starred in a summer tentpole with last year’s “X-Men: First Class,” and recently anchored the first installment of her own blockbuster franchise with “The Hunger Games.” A little fright flick seems like a random pic(k) at this point, but despite having seemingly less at stake than ever before, she refuses to phone this one in and instead gives the movie some much-needed identity. With Lawrence, House at the End of the Street is graced with a great presence and the protagonist is satisfyingly believable.

There’s no shortage of creepy, creaky houses in 2012 cinema and this particular one, conveniently located in the woods at the end of the street, offers another fun ride. It’s bumpy throughout and the ending will be an easy guess for fans of the genre, but Tonderai understands the importance of constricting camera work and Lawrence brings a new flavor to an otherwise rehashed role. Like the other spooky house movies of the year, this remains a freaky little pic that should find appreciation from fans of the genre and garner little attention from others. Anyone who can find enjoyment in experiencing a few good scares is welcome to drop by this house. Anyone not sure how to get there need only look to the title for directions. 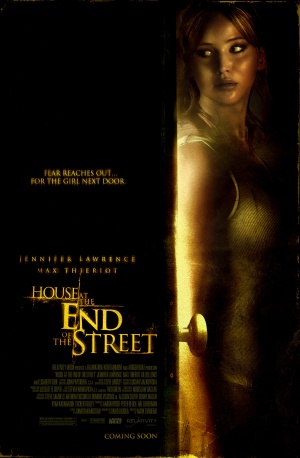