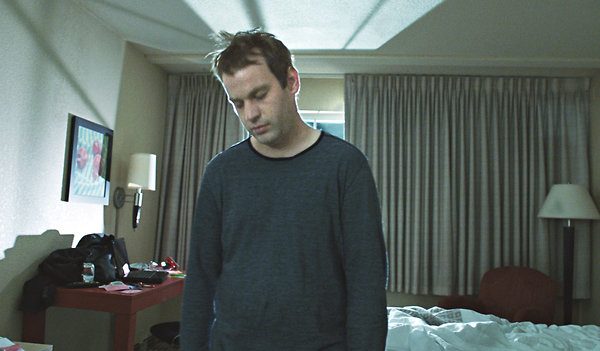 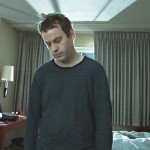 Two people in a long-term relationship can know practically everything about the other person but still be in the dark about some of the most major issues. In the semi-autobiographical Sleepwalk With Me, Matt and Abby have been together for eight years, ever since their second year of college — they live together, they share their daily routines, their friends, and their private jokes together. Abby (Lauren Ambrose), however, notices she is falling behind her peer group. Everyone else is getting married and popping out offspring, but she and Matt are in stasis.

Matt (Mike Birbiglia) knows he wants more out of life, but he has the self-confidence of a nervous gnat. He’s a bartender at a local comedy club and every now and then gets up on the stage to deliver a five minute set of severely mumbled, dated, and twitchy jokes. Matt also seems terrified of marriage. The couple goes to his sister’s wedding and must endure the inevitable, “You’re next!” and “So, when are you finally going to pop the question?” It doesn’t help Matt’s sense of doom that while flipping through the DVR, he sees Abby has recorded hours of wedding and baby reality shows.

While screwing up his nerve to sentence himself to a life of marriage and domestic boredom, Matt also stumbles his way across an agent who starts setting him up with a few extremely low-paying comedy gigs across the northeast. Taking off in his dad’s hand-me-down Volvo station wagon, Matt discovers he is not half bad at this comedy thing and is surprised to find a whole wide world of struggling comics just like him.

Why is his routine getting better? He learns the best jokes are autobiographical. He starts telling jokes and stories about his marriage phobia and that gets understanding crowds rolling in the aisles. The joke which turns it all around for him is, “I’ll get married when I am absolutely sure that nothing else good will happen in my life.” Matt really believes this. He also tells jokes about a crazy sleep condition he has recently developed. In the middle of the night, Matt starts to act out his dreams. He climbs on top of furniture, gets in the shower, runs into things in his apartment, and that isn’t even close to what eventually happens.

Stubborn Matt will not go see a doctor though. He is having the time of his life on the road learning how to be a stand-up comic. However, wonderful Abby is back at home. Matt knows Abby is way too good for him but he doesn’t want to hurt her by filling her in on the truths about marriage he is discovering. Mike Birbiglia wrote this script for Sleepwalk With Me and it follows his real life pretty close. He has this extreme form of sleepwalking and there was a girl in his life like Abby. Throughout the film, Mike faces the camera and speaks directly to the audience in first-person telling us his story. During the rough patches, he must remind us that we are supposed to be on his side since he is one telling the story. 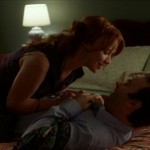 I always smile when Lauren Ambrose pops up in a movie or on the television screen. I remember her from “Can’t Hardly Wait” so many years ago and her role in the outstanding series “Six Feet Under.” Lauren does not disappoint here; I found myself wishing she would go ahead and end their relationship so she could go out and find a guy looking to settle down. If you’re familiar with comics, you’ll probably spot a few you know when they pop on screen in a cameo. I saw Marc Maron, Kristen Schall, Wyatt Cenac, and Amy Schumer; I have no doubt there are probably four more I didn’t even notice.

Mike Birbiglia does a good job with the story of his life. The script is funny where it needs to be, serious where it needs to be, and the first-person speeches to the camera (which he seems to have stolen from Woody Allen) work very well. His bumbling manner and slurred words annoyed me a little bit after awhile, but once he gets his self-confidence up, Sleepwalk With Me perks up too. It will be interesting to see if Mike makes another film in the future with original material or if he stops here because his autobiographic stories are what he is most comfortable with. 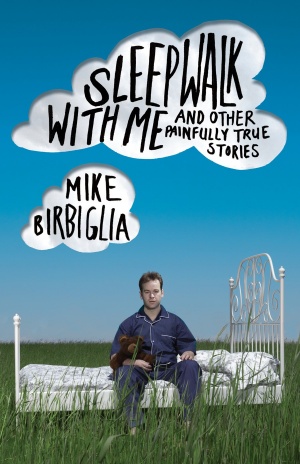