I suppose it’s a generational thing that a lot of younger critics seem to adore the newest film by Jonathan Levine (“50/50,” “Warm Bodies”), The Night Before. I mean when I think of harmless Christmas comedies, my mind conjures up movies like “National Lampoon’s Christmas Vacation” or “Home Alone,” among others. So when did foul language, violence, inebriation, over-the-top drug use and blasphemy become part of the norm (well, maybe in the advent of such films as “Project X” and “21 and Over”)? Are funny scripts so difficult to produce that we substitute the above attributes to every new production and just go along with the crowd which has probably never witnessed a truly humorous motion picture in their collective lives?

I know these are rhetorical questions, but in light of The Night Before, I figured it would be appropriate to try and figure out these universal queries and maybe to justify as to why so many people seem to think this picture is the best comedy ever made while I think it is truly mediocre in every sense of the word. The film definitely relies too heavily on juvenile toilet humor and contains way too much profanity, but it also struggles with its story and characters as well as wildly uneven pacing, and despite some funny moments, there are not enough of these moments to make people rush out and dispense with their hard-earned money or for me to recommend them do so.

To explain, the movie begins with a double funeral and narration by Tracy Morgan and goes downhill from there (if that is even conceivable). Ethan (Joseph Gordon-Levitt, “The Walk”) lost both of his parents to a drunk driver (see how funny the premise is already?) on Christmas Eve and is consoled by buddies Chris Roberts (the ubiquitous Anthony Mackie, “Love the Coopers,” among many other movies in 2015) as a pro football player enjoying a late career surge thanks to steroids; and Isaac (Seth Rogen, “Neighbors”), a seemingly normal guy on the verge of fatherhood.

It’s certainly a mixed bag and it’s difficult to believe these people would find each other interesting or funny in high school, let alone more than a decade later, but I have seen stranger friendships, so I won’t quibble. The two celebrate each Christmas Eve getting Ethan shit-faced because he seems to have little or no motivation to improve himself, working as a waiter elf at a holiday party before ripping off three tickets to the “Nutcracker Ball,” billed to the “Greatest Party Ever,” (how many times have we heard THAT before?). Over a decade later, the annual routine of drunken traditions has gotten pretty repetitive as Isaac and Chris both have obligations in their adult lives, while Ethan remains stunted by self-pity and just plain immaturity, so they decide as a group this party is the final curtain.

There are a few hours to kill before the bash, though, so Levine and writers Kyle Hunter (“Comedy Central Roast of James Franco”), Ariel Shaffir (“Sausage Party”) and Evan Goldberg (“The Watch”) decide to throw in some really “funny” moments, like Isaac’s wife, Betsy (Jillian Bell, “Goosebumps”), providing him with a box of illegal, hallucinogenic drugs — and he really overdoes it; Chris having — extremely — casual sex and then getting his marijuana stolen by one of the many truly hate-filled and unlikable characters in this movie, Rebecca Grinch (Ilana Glazer, “Inside Amy Schumer” TV series, no wonder she’s unlikable); and Ethan getting beat up by a pair of drunken Santa Clauses.

Meanwhile, The Night Before also treats us to a totally freaked-out Isaac (who wears a sweater with a huge Star of David on it to announce to the world — once again — that he’s Jewish; yes, we get it, Seth) throwing up in a Catholic church during Midnight Mass (after having a “conversation” with mannequins in a Nativity scene — okay, that part WAS funny, I’ll admit); Ethan trying to get back together with his girlfriend, Diana (Lizzy Caplan, “Hot Tub Time Machine”); and Chris, embarrassingly trying to impress the younger members of his team and its egotistical quarterback, Aaron Hill (“Twisted” TV series). Oh, and the over-exposed James Franco makes another cameo appearance (ho-hum).

Weaving through all of this is easily the film’s most interesting character, Mr. Green (Michael Shannon, “Man of Steel”), a drug dealer who gives each of the lead characters a unique herb that is supposed to imbue some kind of special power or emotion upon them. The best of these is when Ethan sees a future in which his unborn daughter turns out to be a stripper (hey, I’m trying to a glass half full critic here). Finally, however, we get to the “Greatest Party Ever,” which is the ultimate definition of a letdown. In fact, the term “Greatest Party Ever” seems to just means loud, obnoxious music, women in ridiculously shorts skirts and Miley Cyrus, who encourages Ethan to propose to Diane in front of everyone — and we’ve all seen THAT before. 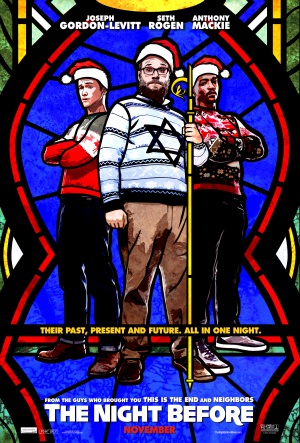