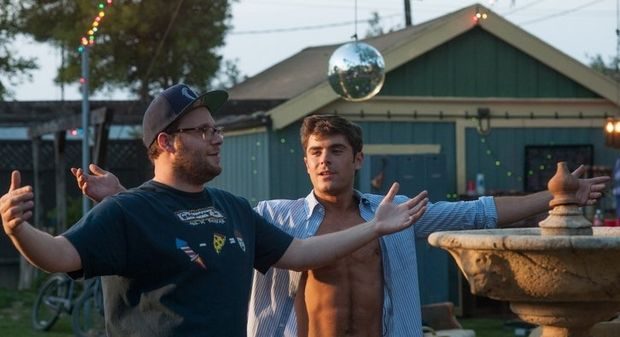 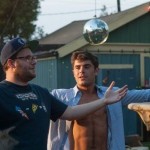 I’m not quite sure how it works but I get a distinct feeling fraternities don’t just up and buy a house in the middle of quiet neighborhoods and setup shop. Especially one known for hosting extravagant, panty-dropping parties and on some sort of super, double secret probation. That, you see, would be a recipe for disaster, which coincidentally, is exactly what Seth Rogen and Zac Efron’s latest comedic effort, Neighbors is.

Okay, it’s not nearly the disaster as say “Scary Movie 5” or some other terrible parody flick that tries to pass itself off as a comedy is, but Neighbors certainly could have been much better.

Rogen (“This Is the End”) and Rose Byrne (“I Give It a Year”) play Mac and Kelly, a young married couple trying to adjust to life with a newborn baby. It’s tough — hanging with friends (especially the single ones) goes out the window as does sexy-time in the bedroom. For newlyweds or couples with children, there are laughs to be found dealing with this change of life with one scene having the couple trying to think of every possible need for the baby to take with them for a night out only to collapse in exasperation and exhaustion, and another in which Mac has to “milk” Kelly after a mishap with the breast pump.

The worthy laughs at responsible parenting angst come few and far between, however, pushed aside for the easier, meatier, raunchier stuff. The stuff 20-somethings crave and can’t seem to get enough of even if it isn’t very well done. Writers, Andrew J. Cohen and Brendan O’Brien, quickly set Neighbors up to be old versus young, responsible versus careless with common sense and the most basic of social norms suppressed as the newly moved in frat and their cop-calling neighbors try to “one-up” each other in their efforts to get the other to say, “I quit!” or “Uncle!” or maybe I don’t know what the end result is supposed to be. Whether they wrote specifically for Zac Efron (“That Awkward Moment”) to play the main antagonist, Delta Psi Beta fraternity president Teddy, I have no idea but his inclusion was one of the few smart aspects to the movie. While his chiseled abs are the perfect foil to Rogen’s flab, Efron manages to bring a layer of unexpected complexity to the role, although not enough to make audiences sympathize with him when he comes to the realization his life may be passing him by. In the role as Teddy’s second in command, Pete, Dave Franco (“Now You See Me”) remains grounded getting his best — and only — licks in during a “bro’s before ho’s” repartee.

Aside from the lack of believability, there isn’t much in the way of originality either, unless of course you consider introducing drug use as some new untapped catalyst for things to happen (which is out of the question if you’ve seen ANY Rogen film). The onesupmanship is relatively tame too, with nothing really getting so over the top (the airbag ruse seen in trailers is about as high as it gets) and the obligatory nudity has a definite obligatory feel to it as if director Nicholas Stoller (“The Five-Year Engagement”) tossed a few scenes in there after he noticed his check boxes next to profanity and drug use were marked off but not the one for youthful, gravity-defying boobs.

It’s all too convenient and tidy and mostly unfunny. And not even Rose Byrne — who actually isn’t half bad in this as the more aggressive Radner — and her adorable Australian accent can distract viewers long enough for them to not conclude that of the two neighbors in Neighbors she and her husband are actually the worst kind to have. I’d prefer to live next door to Teddy and his merry band of idiots than a couple who acts as a friendly neighbor but would go to great lengths not to be if they didn’t like something (and then deny they’re doing it). And hell, I wouldn’t mind an invite to an occasional frat party either.