A superstar athlete surprises us with what they can do in their sport. They don’t just make it look easy, they make it look like no one else can do what they have accomplished — ever again. College football provides us with one of those platforms where superstar athletes are born. Some players won’t hit their prime until they make it into the NFL while some players peak in their junior year and are never able to translate their skill set into the NFL. But then you have some players who were just born to excel at the game of football and it doesn’t matter where they are — college or the NFL — they were going to be one of the greatest players of all time . . . until a catastrophic event changes their life.

One of the most fascinating and overused genres in film is the underdog story. But its state of being overused is forgivable as long as the story is absorbing — and you could argue that no one knows the underdog genre better than Angelo Pizzo. The longtime screenwriter, first-time director is behind these beloved sports movies: “Hoosiers,” “Rudy,” and most recently, “The Game of Their Lives.” But now, he’s back with his brand new film My All American and the question remains — can he score again? Well, I’ll give you a hint . . . the odds are stacked against him.

At the center of this tale that’s meant to inspire is legendary University of Texas football player Freddie Steinmark, who’s played by Finn Wittrock (“Noah”). Although he gives a modest performance that aims to capture the essence of a real life person, his character onscreen is as bland as other recent biopic protagonists like Louis Zamperini in “Unbroken” and Jackie Robinson in “42.” But Wittrock is not the only one who has a performance that gets lost in the generic character syndrome. Aaron Eckhart (“I, Frankenstein”), the film’s most notable star, plays celebrated University of Texas head coach Darrell Royal, but even he isn’t able to move past the clichés of being a “tough, smart, and charismatic coach.”

What drives a good movie is a compelling protagonist who fights to achieve their mission. Here, you have a young football player who’s considered to be too small to compete in a big-time college football program. However, he works extremely hard, has a noble heart, and is highly influential among his teammates (sound familiar?). The major difference between Rudy Ruettiger and Freddie Steinmark is Steinmark was a remarkably better player. The narrative framework in My All American is a greatest hits collection of elements that made “Rudy” work as a movie while My All American suffers by sounding exactly like the hit song it was proceeded by — leaving itself unable to breakaway as its own single.

Pizzo, unfortunately, plays all of the same notes: A small-town football player who has a big dream, he’s a devout Catholic, his best friend is tall, his pretty girlfriend Linda (Sarah Bolger, “The Lazarus Effect”) is devoted to him, and whenever he practices on the football field, a Jerry Goldsmith-type musical score appears (except none of the music is memorable because it wasn’t from Jerry Goldsmith). Hardcore fans of the sports genre can usually depend on getting satisfied from hard-hitting football scenes, but even in this offering, some of the ultra-violent collisions seem comically unrealistic. Repeated usage of montages skip past opportunities of actual character development like a deeper exploration of Freddie’s religious faith. The film is too interested in being a highlight reel instead of trying to get in the trenches of this man’s life. By brushing over the details, the film gets to a point where it forgets what year it’s in (during a moment in the film, a sweeping overhead shot of the University of Texas mistakenly, yet clearly, shows cars that were made past 2013).

With all of those tackles that the filmmakers missed, the biggest problem of My All American is its handling of conflict. Once Freddie gets to college, he’s a dominant football player, a loving boyfriend, a caring friend, and a man of faith — his cinematic life is perfect! Nothing ever goes wrong for him until the last third of the movie where he battles cancer. The story appears to play out in a way where it doesn’t want to earn your sympathy, it just expects you to give it. If a stock story + stock characters + stock circumstances = stock entertainment, then that equation for audience satisfaction has no effect on me. Although it should be noted, Freddie Steinmark had a tremendous impact at the University of Texas and this adaptation on his life should play well with its alumni, college football fans, and faith-based audiences.

Without a doubt, this is a shrewd move for Pizzo and his team of filmmakers to create a “Rudy” for this generation of moviegoers who are too young to remember that film. But with that, Pizzo runs into the same problem many biopics face — generating a film that fails to be as transcendent as the figure it’s portraying. Freddie Steinmark and other biopic protagonists like him should be cinematically interesting, but instead, he’s the star of a story that plays in a way where at the end of the game — it doesn’t deserve the right to be carried off the field. 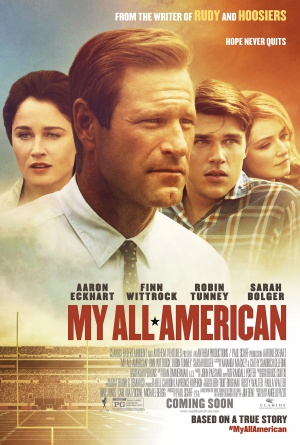