It’s hard to say how much art there is in imitation, but Angelina Jolie certainly apes the old-fashioned Hollywood tear-jerking biopic like the best of them. Whatever that’s worth is where the debate lies in Unbroken, Jolie’s second feature-length directorial effort and a true story of a triumphing American if ever there was one. A lavish, expensive, and altogether ambitious epic about Olympic runner-turned-WWII-bombardier-turned-POW Louis Zamperini (Jack O’Connell) is the kind of thing that seems begging to be made and Jolie passionately answers the call.

There’s probably room for a much better movie here, one that feels less like “Forrest Gump,” for example, but Unbroken at least benefits from having one hell of a story to tell. If any tale of survival deserves the bombastic cinematic treatment, it’s this one. Thanks to the power of cheesy flashbacks, we see Louie as a kid (C.J. Valleroy), wasting whatever potential he has by shoplifting and hiding his stolen items in a secret spot where he sits by himself and drinks liquor out of a bottle painted to look like it contains milk.

Just so we’re fully aware of kid Louie’s reputation, a fight started by a few other boys who are picking on him simply because he’s from an Italian immigrant family leads to the local cop escorting him home and telling him loud and clear that everyone in town wants Louie sent to reform school. There’s not a lot of gray area at this point and none is about to arrive. Louie is on a downward spiral and headed nowhere good. Luckily, when being pursued one afternoon, he happens to dash across the field during a school track practice, catching the eye of a peer who convinces Louie to take up running as a sport.

Cue the shot of young Louie training in uniform that seamlessly segues into a shot of adult Louis (O’Connell from here on out) continuing the stride. Yes, Jolie is embracing any and all clichés here and certainly isn’t trying to break any new ground. It’s all a little laughable how faithfully Unbroken follows the guidelines on how to make and how to be an old-fashioned, flag-waving epic drama, but at least Jolie has assembled a talented team to prevent the movie from entirely embarrassing itself once the narrative really kicks into gear.

With veteran cinematographer Roger Deakins providing predictably pretty images and impeccable editor Tim Squyres (Ang Lee’s regular collaborator) cutting them together and ubiquitous composer Alexandre Desplat applying a swelling score to it all, the movie certainly has an undeniable air of professionalism about it. None of these guys are doing their best work, but they’re all doing a fine job nonetheless and that seems to suit Jolie’s loudly conventional approach quite comfortably.

The main cast doesn’t have the support of any great veteran performers, but Jack O’Connell (“300: Rise of an Empire”) leads the bunch triumphantly and it’s his performance that feels a cut above the hokey hooey Unbroken aspires to be. O’Connell has all the boyish charm his role requires early on, when he’s running and attending the Olympics in flashback while entrenched in a WWII air battle in the present. And then when a rickety plane he’s aboard crashes into the Pacific, stranding the few survivors in life rafts, the actor imbues Louis with a brave heroism and calm resolve that proves key to maintaining the sanity of himself and his fellow survivors as they float aimlessly in hope of rescue. 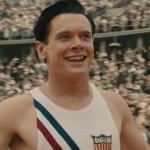 This portion of the movie is handled well, with no cutaways to any other characters, no escape from the endless floating along. To keep things moving, Jolie fills this section with visually exciting action, including a literally flashy storm sequence and some jumpy shark encounters. Jolie’s style and approach remains ever consistent throughout the entirety of her picture, but this at-sea chunk stands out because there are clearly easier ways to make this part of the story work as general audience-friendly entertainment. There’s nothing here that we haven’t seen before, but Jolie’s commitment to sticking with Louis for the whole of this long, repetitive ordeal is admirable, especially within the confines of a very conventional piece of work.

If that was the peak of Louis’s trials and tribulations right there, it would be a mightily impressive tale of determination and resilience. But it’s barely the tip of the iceberg. From there, Louis is rescued in an ominous scene (“I have some good news and some bad news,” he correctly informs his waking raft-mate) by the Japanese, who toss him into a jungle POW camp, which proves to be a walk in the park compared to the camp he’s then shipped off to, wherein he meets the movie’s chief villain, Mutsuhiro “The Bird” Watanabe (rock star Miyavi).

Life in the POW camps understandably claims a large amount of the movie’s running time. Jolie proves capable of capturing the horrors of this brutal imprisonment without glossing over things too much, but while it’s all quite convincing, the movie’s heartstring-tugging simplicity gets in the way of a true emotional connection. What Louis is going through is horrible and harrowing, but it’s never as moving as Jolie intends it to be.

During one of our hero’s darkest moments in the ugliest and most dehumanizing of the three POW camps he is sent to, Louis digs deep for the strength he needs to hoist a block of wood over his head in a defiant measure against his captors. O’Connell expresses the emotion well with his face and body, but Jolie takes the obvious route and shows us a flashback of a triumphant pre-war Louis at the Olympics. Of course. There comes that need to stifle laughter again.

It’s moments like this that make Unbroken both a completely derivative movie and an oddly endearing experience. Everything is so by the book and the whole massive canvas is treated like a tablecloth for a veritable feast of fromage and it’s very sentimental and kind of bad as a result, except that these specific individual elements (Jolie’s confidence, O’Connell’s charisma, Deakins’ crisp photography) all support each other in a way that’s kind of sweet. It helps immensely that Zamperini’s story is one of seemingly impossible odds, the kind of tale Hollywood loves to tell and one of such grim horrors that it can weather the storm of a nostalgically old-fashioned adaptation. In short, beating up on the movie, tempting as it may be, just isn’t much fun. That doesn’t really raise the movie to the level of good, but it does make this heavy dose of familiar formula taste a little less sour. 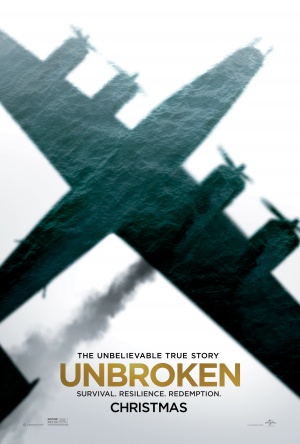