If life is up and down with a few bumps along the way, what better representation is there than a cable car’s ride up and down a mountain? This particular cable car ride takes place in the riveting documentary Manakamana, a ride that brings passengers, both foreign and local, to the Manakamana Temple in the Gorkha district of Nepal. Consisting of ten-minute segments with extra time taken to show a darkened terminus building, the film is a portrait of nine different families and friends visiting a shrine to the Hindu goddess Manakamana who, it is believed, makes wishes come true.

Stephanie Spray and Pacho Velez of Harvard’s Sensory Ethnography Lab, with their 16mm camera anchored to the floor, simply filmed people going up to the 17th century temple, as well as those on their way down (one trip is a voyage with four goats tied together being brought to the temple to be sacrificed). Out of thirty-five trips shot by the filmmakers, eleven were selected and the film was edited over a period of eighteen months. Spray, who has lived in Nepal since 1999 knew some of the passengers and this may account for the fact that conversations are natural and relaxed, even though I’m sure they couldn’t help being aware of the camera.

The first trip is silent as an elderly man sits next to his grandson, occasionally gazing at the passing scenery as the car climbs higher and higher. When conversations do begin after about twenty minutes into the film, people talk about their families, their religion, the way it used to be, a trail that is no longer used, and the replacement of thatched roofs by slate and slate roofs by tin. Many comment on the beauty of the surrounding hills and the sal trees, said to be favored by Vishnu in the Hindu tradition and under which Buddha is supposed to have been born.

Three older women chant their message of worship to the goddess while, in a sharp cultural shift, three long-haired young men talk about their rock band and take pictures of themselves from their mobile device. Additionally, there are two young women who speak English, one sounding like an American, the other Nepalese. We are also entranced by the journey of two accomplished musicians who perform on the traditional stringed instrument known as the sarangi. One of the most entertaining and playful sequences is that of two older women on their way down eating ice cream on a stick, trying to prevent it from dripping all over themselves and the cable car.

Many of the passengers bring offerings to the goddess such as a basket of flowers and a rooster, though it is reported that the sacrifice of poultry has been banned. While it is tempting to search for a spiritual message from the film, to me its pleasure lies in the simple joy of just being with a diverse group of people, some young, some old, and sharing some time with them. The American girl tells her friend that she has had a hard time finding something to write in her diary every day, that sometimes nothing really interesting happens. Indeed, we are trained to always wait for something to happen. Manakamana allows us to have the experience that, regardless of its seemingly repetitive nature, life is always new, unique, and beautiful. In each day and in each moment, a reason to celebrate. 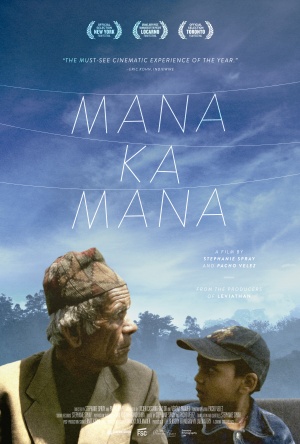