So it turns out that sixty years prior to Mel Brook’s epic 80s run of classics, Buster Keaton was busy beating him to the parodic punch. Keaton’s brand of physical gag comedy has always been wildly distinctive and brilliant, but his work is not generally so focused on the specific spoof. That brand of comedy would become commonplace in the 80s when Brooks fought for laughs against the Zucker brothers, but it’s far from the norm in the silent era. And yet in Three Ages, Keaton’s first feature, the comedy legend is blatantly and riotously lampooning D.W. Griffith’s sumptuously towering 1916 epic “Intolerance.”

Griffith’s pic is no small target, either. It’s as massive as anything attempted in the silent era, a beautiful, overwhelming, jaw-dropping look at several different historical periods and man’s struggles within them. It’s an incredible movie and a memorably unshakable experience, but like other works by Griffith, it could be fairly accused of being rather earnest. So along comes Keaton, some seven years later, with his own take on a multiple time period tale, this one a little sillier and a lot shorter.

Three Ages splits its narrative between the Stone Age, Ancient Rome, and a modern metropolis. In each period, Keaton portrays a hapless weakling desperately seeking the love of a young woman (Margaret Leahy) who continually catches the eye of a brawny alpha male (Wallace Beery) who appears far better equipped for courtship. Keaton’s puny hero must go through all sorts of trials and tribulations to best his competition, including testosterone-fueled showdowns in various time appropriate manners.

In the Stone Age, Keaton’s caveman (wearing an over-sized, unflattering fur outfit) has a club fight with Beery’s much larger caveman. In Ancient Rome, Keaton faces Beery in a chariot race, wherein hilarity ensues when our hero responds to a random snowfall by racing with a dog-pulled sled instead. He even uses a cat on a stick to entice the canines. And in the modern time, Keaton of course meets Beery on the football field, allowing the hero to do some trademark physical humor. These moments represent just a fraction of the clever connections that link all three time periods and their characters across a running time that barely pushes an hour. 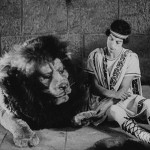 Many of the jokes are sight gags achieved through sets and props instead of physical stunts and the Ancient Rome scenes often feel like a direct predecessor to what Brooks would later do in his 1981 movie “History of the World, Part I.” Stuff like a sign written in Latin being translated to “No Parking” (for chariots, of course) and a sage weather man writing down the weather on a board as “fair and warmer” before stepping outside to post it and finding the city is in a snowstorm all feels like the kind of wacky fun more regularly attributed to Brooks than Keaton. And yet here it is, a silent movie that hurls its jokes at the screen so hurriedly and with such abandon that it can only be seen as the whole cinematic spoof genre coming into focus.

Equally impressive is that Three Ages doesn’t skimp on the production values, at least within reasonable expectations. Each time period has a rather lavish look, with the Stone Age even sporting a couple shots of a dinosaur brought to life with primitive, though still wonderful stop-motion animation. An elephant is even fitted with some fake curled tusks to apparently let it pass for a Mammoth, though no attempt is made to make it Woolly. The Ancient Rome sequences feature some ambitious sets, the likes of which aren’t often seen in silent comedies. The modern era obviously requires the least amount of effort in terms of creating a period-specific look, but it actually features one of the movie’s most awesomely complex stunts, involving a rooftop jump that turns into a fall and ends up on the ground floor of a firehall.

With each time period succeeding on a visual level, Three Ages keeps its spoofing classy and cinematic. Bursting with wit and humor, it never goes more than a minute without trying for a laugh. There are moments of glorious inspiration (when Keaton’s Roman character ends up in a pit with a lion, he vaguely recalls the tale of Androcles and decides to get in the lion’s good graces by giving it a manicure) and even moments that seem to parody iconic scenes from much newer movies (one bit shares its sentiment with the ending of “The Graduate”). Even by by Keaton’s standards, there’s a lot going on here.

The movie’s concept of relationship politics is perhaps fairly and unsurprisingly dated (boys get girls in the end merely for being bold and relentless), but a final gag involving each period’s couple revealing their brood proves somewhat prescient, at least in comedic terms, when the modern lovers follow their predecessors’ kid-heavy images with a shot of them walking their dog. Even so early in his film career, Keaton was ahead of his time, spoofing not only the past with Three Ages, but also the future. 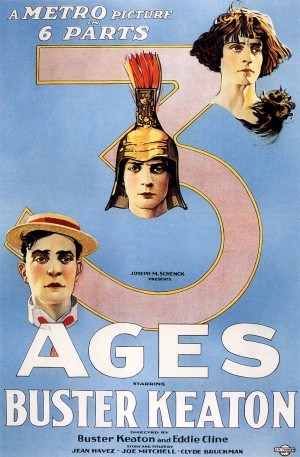