Opening night at the Spooky Movie International Horror Film Festival, held annually in Silver Spring, Maryland, is always a treat. This year, the opener was The Final Girls, a thriller/comedy that subverts many horror-film conventions — indeed, the very notion of movies themselves.

Duncan, a huge, huge fan of the two “Camp Bloodbath” films, has promised the local fan club that he can bring the daughter of the one and only Amanda Cartwright to a showing of the films. Something goes wrong during the showing, though, and soon Max and her pals are literally brought into the “Camp Bloodbath” movie itself.

It’s sort of like “The Purple Rose of Cairo” in reverse. The kids realize they’re in the movie when they see a familiar Volkswagen van approach them on a dirt road in the middle of a forest, just like in the film. A passenger asks about the way to the camp; moments later, the van is gone. And then another 92 minutes later (not for us watching, thankfully), the van arrives again. You get the idea.

This is taking film immersion to an entirely new level. Obviously, the teens want to just get out of the movie and get back home, but the movie won’t let them, exactly. Luckily for everyone, Duncan knows the movie by heart, line for line. The plot of “Camp Bloodbath” will be a familiar one to even the most casual of movie goers — camp counselors tell about the legend of a bullied boy who exacted revenge on his tormentors and who may still be stalking the camp. How can our modern-era group deal with this?

As if evading a machete-carrying masked psycho wasn’t enough, Max also has to deal with seeing her mom, playing the virginal Nancy, again. How do you tell someone that you’re from the future, and another universe entirely, and that they’re your mom? You kind of don’t. Awkward! But certainly Max and the others begin to feel real empathy toward the counselors, which include the ditzy blonde Tina (Angela Trimbur, “The Kings of Summer”), the macho Kurt (Adam DeVine, “The Intern”), the hip Blake (Tory N. Thompson, “Me Without You”), and Nancy. Sure, it’s just a movie, and they’re just characters, not even actors, but . . . they sure seem real, don’t they?

I loved the premise of The Final Girls. I also loved the various tropes that are nudged and tweaked, such as the fact that having sex means you die next, getting naked means you die next, and the only person who can defeat the psycho, the Final Girl, will be the virgin among them. I also loved the authentic look and feel of the movie within the movie; it’s set in the 1980s, so there’s plenty of “awesome” and “tubular” and high fade haircuts and boomboxes and short shorts.

The writing, by Joshua John Miller and M.A. Fortin, is quick witted and heavily nuanced. The script gives each of the main characters the opportunity to stand out, so we’re not stuck with one three-dimensional character and several support staff. In the hands of a talented cast, particularly Farmiga (sister of actress Vera), Akerman, DeVine, Middleditch, and Dobrev, the terror is copiously sprinkled with organic wit.

The Final Girls is a successful send-up of 80s slasher movies, with a nod to contemporary dramas that focus on the loss of a loved one. Director Todd Strauss-Schulson does a magnificent job keeping the chaos under some control with what feels like a light hand designed to let the plot (and the actors) shine. He succeeds. 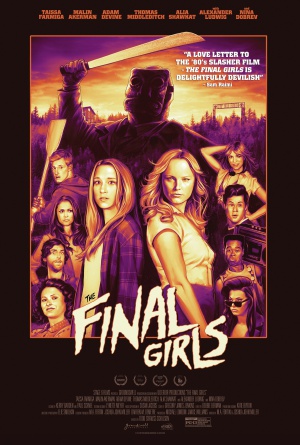