Winner of the Best Director Award at the Cannes Film Festival, Hou Hsiao-hsien’s (“Flight of the Red Balloon”) first film in eight years, The Assassin (Nie yin niang), may initially seem out of character for a director whose previous work has been in realistic social dramas set in a contemporary historical context. Yet it is clear from the opening black-and-white prologue that it is a Hou film. It is wuxia as fine art employing Hou’s familiar style: Glacial pacing, non-professional actors, long takes, minimal dialogue, and an elliptical story, all bound together with a graceful poetry. The only difference is a big budget that allowed him to film in breathtaking natural locations such as Hubei Province, Inner Mongolia, and Nara, Japan and use elegant period costumes that add richness to the film.

Loosely based on the short story “Nie Yinniang,” The Assassin is set in 9th Century rural China near the end of the Tang Dynasty where the Imperial Court and the adversarial Weibo province co-exist uneasily. Magnificently performed by the elegant and elusive Qi Shu (“Three Times”), Nie Yinniang has been trained by the nun Jiaxin (Fang-yi Sheu, “Touch of the Light”) to become a skilled assassin after having been abducted from her home when she was a child. Defying Jiaxin’s instructions to “First kill the one he loves, then the target himself,” she fails on a mission to Weibo when she cannot muster the required inhumanity to kill her intended target, a father playing with his son who is chasing a butterfly.

Given another chance to show her lack of conscience, she is sent to Weibo again to assassinate the Governor of the province, her cousin Tian Ji’an (Chen Chang, “The Grandmaster”). At odds with the Emperor, Tian also has problems with his wife (Yun Zhou, “Gone with the Bullets”) who is jealous of the pregnant Huji (Nikki Hsin-Ying Hsieh, “Tai Chi Hero”), a favorite in one of Tian’s concubines. Having to contend with both her love for her father, an adviser to Tian, and her enduring feelings for the man to whom she was promised as a bride when she was only fifteen years old, Nie is a reluctant warrior, engaged in both an inner and outer struggle. Fortunately, it is a reluctance that allows us to consider what it truly means to take someone else’s life.

As the narrative of The Assassin unfolds, many characters come and go and events become confusing and difficult to follow, but that is almost irrelevant. Accompanied by the haunting score of Lim Giong, the film is overwhelming in its sensual appeal. With heightened color, a brooding atmosphere, and meticulously composed shots by cinematographer Ping Bin Lee, each scene can be savored like a masterful painting. In one of the film’s most exquisite shots, Jiaxin stands on a mountain overlooking a wide expanse of the valley as Yinniang approaches and kneels down in respect while the clouds begin to surround them.

Dotting the long silences are action scenes but these also defy convention. The swordplay is swift and over quickly as the camera pulls back to view it from a distance, refusing to glamorize the violence. There is also no bloodshed. As Hou explains, “I don’t like blood, so no matter how the characters exchange blows, there isn’t any bloodshed.” While The Assassin requires patience, its rewards are immeasurable. In its focus on alienation, there may be a tendency to read into it a political or social message, but neither will reveal its innermost truth. It may simply be that, like life, the experience itself is the meaning. 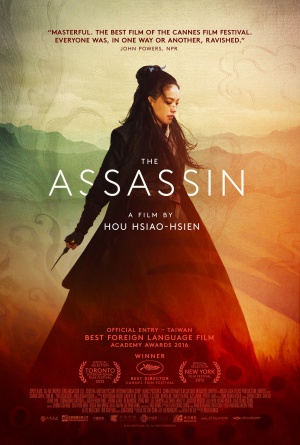