Loosely based on Walter Isaacson’s best-selling biography with a screenplay by Aaron Sorkin (“The Social Network”), Danny Boyle’s (“127 Hours”) Steve Jobs is not a conventional biopic of the famous co-founder of Apple Computers but is more like an impressionist painting — short strokes of paint that capture the essence of the subject rather than its details. While the film may not always contain the “literal” truth, it does show, in Roland Emmerich’s phrase, the “emotional” truth, succeeding in conveying over a period of fourteen years the ambiguity of Jobs’ character: Both his humanity and his cruelty. Any conclusion over whether his genius ultimately outweighs his ruthlessness, however, is left for the viewer to decide.

The film is structured in the form of a three part play (shot in three different formats) that covers key periods in Jobs’ life. Each part shows the public unveiling of a new product and the backstage jousting with three people who were present during all of the launchings: Systems Developers Andy Hertzfeld (Michael Stuhlbarg, “Pawn Sacrifice”) and Steve Wozniak (Seth Rogen, “Neighbors”), and CEO John Sculley (Jeff Daniels, “The Martian”), people he was always close to professionally but not emotionally. Steadfastly by his side throughout these years is his assistant Joanna Hoffman (Kate Winslet, “Insurgent”), one of the few people who has learned to deal with his eccentricities, though it never becomes easier.

The first part begins in 1984 in Northern California where Jobs (Michael Fassbender, “Slow West”) is ready to introduce the Macintosh to an eager public excited by a recent Super Bowl commercial. It is here that we first see Jobs’ arrogant, controlling personality when he demands that Hertzfeld get the machine to say “Hello” even though there is not enough time and Andy does not have the specialized information that would allow him to open the Mac prototype. The gutsy Joanna asks Jobs, “Do you want to try being reasonable, just to see what it feels like?” adding, “If you keep alienating people for no reason, there won’t be anyone left for it to say hello to.”

In one of the film’s sharpest verbal exchanges, When Hertzfeld tells Jobs that “We’re not a pit crew at Daytona,” Jobs retorts, “You’ve had three weeks, the universe was created in a third of that time,” and Hertzfeld counters, “Someday you’re going to have to tell us how you did it.” The first part also sets the stage for Jobs’ relationship with his former girlfriend Chrisann Brennan (Katherine Waterston, “Inherent Vice”) and his young 5-year-old daughter Lisa (Makenzie Moss, “Do You Believe?”), whose paternity he has publicly denied, a relationship that grows during the course of the film. Here, Chrisann confronts Steve about his cruelty in denying paternity of Lisa in a Time Magazine article, and reminds him that he is a millionaire while his daughter is on welfare.

In another reflection on his character of lack thereof, Wozniak asks Jobs to publicly point out the accomplishments of the team that produced the highly successful Apple II computer, but he refuses time and again since it is one of the products he wants to kill. The Macintosh fails to meet expectations, however, and Jobs is fired in 1985 by the Board of Directors at the urging of CEO John Sculley who was later made a scapegoat for their action. Jumping to 1988, Jobs is now running a company called NeXT and is preparing to introduce another new product, a computer with an innovative black cube design designed for educational use

A slight drawback is that it costs $6,500, a hefty sum that does not seem to faze Jobs in the least. Backstage at the San Francisco Opera House before the unveiling, Jobs finds himself once more in heated conversations with Hertzfeld, Wozniak, and Sculley. At one point, Wozniak tells him, “You can be decent and gifted at the same time — it isn’t binary.” Chrisann and Lisa (now played by Ripley Sobo, “Ricki and the Flash”) are also there and there are hints that a positive relationship is forming. When the final sequence rolls around, it is 1998, Jobs is back at Apple, and the Internet is now the focus of attention.

Sensing that, Jobs introduces the iMac, this time with a sensible price that forecasts a huge success. Lisa (now played by Perla Haney-Jardine, “Untraceable”) is now 19 and a freshman at Harvard where she is writing for the Harvard Crimson and there is a deeply moving scene when Jobs confronts Hertzfeld who has paid Lisa’s first-year tuition. Even if the film’s characterization of Jobs may be more superficial than revealing, Fassbender’s performance is always convincing while the ensemble cast provides exceptional support, especially Kate Winslet and Seth Rogen, though it is Fassbender’s show all the way.

In spite of the film’s non-stop walking and talking where people are constantly interrupting each other, Steve Jobs is an exhilarating high — one that is fast-paced with enough kinetic energy to mimic Jobs’ dying words, “Oh Wow!, Oh Wow!, Oh Wow!” 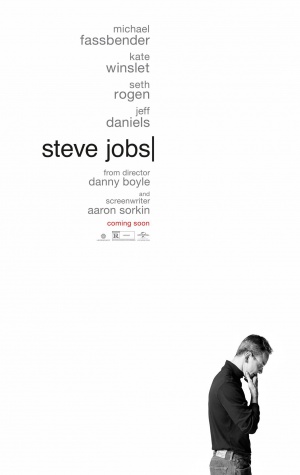