As a recap to bring readers up to speed: As “Divergent” came to a close, Tris Prior (Shailene Woodley, “The Spectacular Now”) and her friends were embroiled in a violent battle as the once-balanced faction system came crashing down around them. Caught up in a simulation ordered by Erudite leader Jeanine Matthews (Kate Winslet, “Carnage”), brave and fearless faction Dauntless members ripped through Tris’s home faction Abnegation with ease (the Abnegation is the faction of selflessness so they were caught unprepared, put up little fight, and were decimated). Uncontrolled by the simulation, Tris (a Divergent — one who fits into multiple factions), was forced to kill her close friend Will in self-defense and ultimately escaped from Dauntless and Erudite soldiers with her boyfriend Four (Theo James, “Underworld: Awakening”), her brother Caleb (Ansel Elgort, “Men, Women & Children”), and fellow Dauntless-initiate Peter (Miles Teller, “Whiplash”), to seek shelter before attacking again.

A continuation of Veronica Roth’s post-apocalyptic young adult tale set in a desolate once-was Chicago, Insurgent begins as Tris wakes from a terrible nightmare in which all her loved ones have turned on her. Safely housed in peace-loving Amity where she has taken refuge with Four, Caleb, and Peter, Tris continues to battle her demons and guilt over the deaths of her parents and of her friends. The voice of Jeanine Matthews echoes over the city as she claims that “Every faction plays a crucial role in maintaining social order,” and warns that Divergents pose a dangerous threat to their way of life. She lies and says that the attack on Abnegation was the fault of Divergents and their sympathizers, and she has declared martial law until all of them have been captured. In truth, a box has been discovered that holds the key to the survival of the faction system, and Jeanine is desperate to open it. Only a Divergent can access the message inside, and must pass simulations from all five factions in order to succeed.

The peace is short-lived, however, when a convoy of trucks crash through the trees led by Erudite soldiers Eric (Jai Courtney, “Unbroken”) and Max (Mekhi Phifer, “Flypaper”), who are searching for the strongest of the Divergents for Jeanine’s experiments. Tris and Four escape their clutches again, encountering a group of factionless men and women led by Four’s mother Evelyn (Naomi Watts, “St. Vincent”) who wants their help to destroy Jeanine and the faction system once and for all.

“The Divergent Series” is fully-ingrained into the young adult movie culture, having set itself as the heir apparent to the “Hunger Games franchise,” and it’s guaranteed to make quite a bit of money in its opening weekend, justifying to the Hollywood market machine a four-movies-from-three-books plan. To the rest of us, however, these films are turning out to be empty imitations of books that have so much more depth. “The Divergent Series” is the first trilogy that didn’t bore me in the second book, and held me riveted to the very end of the third. The faction system and characters (both heroes and villains) were dynamic, and the simulations, as they were depicted in the novels, were fascinating, forcing individuals to face and overcome their deepest fears.

Unfortunately, the film “Divergent” presented bland characters and spent far too much time setting up the system to give audiences any real action, and the central characters lacked energy, strength, and personality. In Insurgent, there’s a half-hearted attempt at depth, as the story focuses on Tris’s psychological guilt, but the torment becomes a shallow one-trick pony. Yes, she’s the one who will save everyone. Yes, she’s sad and guilty. Yes, she misses her mother. Tris is forever running away from soldiers, from Four, from her friends, and from her past. It gets old pretty quickly. Basically, this film is all about guilt and running.

Additionally, the star power in Insurgent is wasted, yet again. Oscar-winner Octavia Spencer (“The Help”) is a throwaway casting choice as Amity Johanna (who has more of a role in the novels), and Oscar-nominated Naomi Watts has barely ten lines in the whole film (though she is gifted with the closing scene of the film — a scene that was drastically changed from the book). And again, Oscar-winner Kate Winslet’s portrayal of Jeanine is just as flat as it was in the first film; Roth’s written Jeanine is so much more diabolical than these movies are giving her a chance to be. This should have been a really fun role for Winslet to take on, parallel to Donald Sutherland’s President Snow in the “Hunger Games.” Finally, Peter is the greatest sin, as he’s about as cookie-cutter and predictable as a character can ever be; even Miles Teller himself looks bored by his own role.

Insurgent, like “Divergent,” is a fluff film for teenagers to swoon over. Even though young adult literature is widely read by teens and adults alike, this adaptation isn’t bringing to the screen the intensity and complexity found in the pages of the books. Granted, it’s not a boring film; I’ll admit that the story isn’t terrible, but there is nothing to sink your teeth into. There’s a lot of running, there’s a lot of guilt, and there are a lot of majorly talented actors who are wasted in empty roles. It’s kind of like enjoying some cotton candy at the fair — light and sugary, but no real substance. 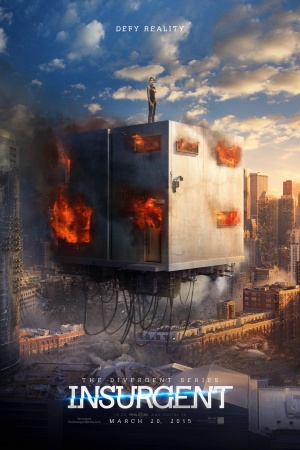