If you are thinking about engaging in some other activity after watching Damien Chazelle’s Whiplash, be sure to leave some time for decompression. Winner of the Grand Jury Prize and Audience Award at the 2014 Sundance Film Festival, the semi-autobiographical Whiplash is a visceral, adrenaline-pumping musical drama that raises — but does not resolve — the age-old question of whether the end justifies the means. In the film, 19-year-old Andrew Neyman (Miles Teller, “The Spectacular Now”), an ambitious drumming student enrolled at the prestigious Shaffer Conservatory of Music (fictional) in midtown Manhattan, comes under the tutelage of Terence Fletcher (J.K. Simmons, “Contraband”), a high-ranking instructor who is well-known for pushing his students to the limits of their endurance and beyond.

From the time that Fletcher watches Andrew in practice and invites him to play in the school jazz band, the film is essentially about the confrontation between the driven student and the seriously overbearing instructor, both pursuing perfection but by vastly different approaches. Fletcher does not hesitate to use racial, religious, and homophobic slurs, throw chairs, or play demeaning psychological games to motivate his students. In one instance, he starts and stops a performance over and over with shouts of “not my tempo,” and repeatedly browbeats a pupil demanding to know if he is “rushing” or “dragging.”

In another example, he yells that someone in the band has lost the beat and asks the culprit to identify himself. When no one comes forward, Fletcher singles out a heavy-set boy and pressures him to admit that he was off-beat, then, on his reluctant admission, orders him to get out. Later, he tells the class that the boy was not off the beat but the fact that he didn’t know that was just as telling. Close-ups of Fletcher’s one-on-one confrontations show every line on his face including his contortions, grimaces, and each drop of his sweat.

One of his justifications is that toughness pays off, citing the apocryphal story of teacher Jo Jones throwing a cymbal at the head of Charlie Parker that motivated him to practice harder and become the great jazz musician he turned out to be. The two most harmful words in the English language, Fletcher says, are “good job.” He is, however, apparently more interested in his own legacy than in developing talent and his lack of integrity is evidenced when he lies about what actually caused the untimely death of one of his best students. Andrew is also single-minded in his pursuit of excellence, becoming the band’s core drummer by mastering the double-swing time beat and practicing until there is blood all over his hands and instruments.

His only release is going to the movies with his father Jim (Paul Reiser, “Life After Beth”), an English teacher who gave up his ambition to become an author. As a single dad, he is very supportive but has no vision of what Andrew is capable of. Though powerfully assertive behind his drums, Andrew is awkward and insecure socially. His relationship with Nicole (Melissa Benoist in her first starring role), a concession worker at the movie theater, begins promisingly but ends abruptly when he tells her that their relationship, if continued, would become a hindrance to his ambitions, an idea she predictably does not take kindly to.

When Andrew’s cousins receive plaudits for playing football and both he and his father are disparaged at a dinner party, the conversation deteriorates into an angry exchange of insults about what it takes to succeed in life, Andrew, while truthful, comes off as a bit Fletcher-like in his put-downs. Both Teller and Simmons turn in amazingly convincing performances, genuinely capturing the essence of their characters and it’s difficult to imagine any other two actors in their roles. Teller, an accomplished drummer, is vulnerable and likable though we become leery of his escalating internal fury.

Simmons is a powerful presence who dominates every scene he is in. Though he is basically an unsympathetic character, he shows moments of humanity that bring his toxic character into a sharper focus. While the most provocative aspect of Whiplash is the question of how far a teacher should go in motivating their students, it seems to me that Chazelle is saying that while harshness, crudeness, and authoritarianism may sometimes work temporarily to achieve a desired result, without the element of compassion, a talent may be realized but only at the price of health and well-being.

The most compelling aspect of the film, however, is not the philosophy but the music and it is terrific. All the emotional build-up of the film comes together in the final segment which, while open to interpretation as to its underlying meaning, explodes into a musical epiphany that is far beyond anything that I’ve ever seen in film in the same vein. If Whiplash could succeed in turning me into a jazz fan, there is no limit to the miracles it can accomplish. 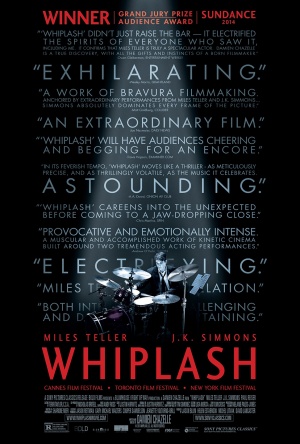