Maker of music pieces, mood pieces, moving pieces, Xavier Dolan is a one-man filmmaking tour de force. And yet he knows that in order to tap into the meaty emotional center of his stories, he must trust his actors and allow them to run away with their roles. Somehow, this adventurous approach, of being both in control and at the mercy of his explosive cast, results in works of beautiful, haunting art that feel utterly transfixing in their pursuit of cinematically captured truths that cut compellingly to the bone.

Dolan’s latest, Mommy, tells of a fictional near-future Canada where parents of violent children now have the option to send their seemingly unraisable kids to long-term government care facilities, essentially signing away their parental rights in a last-ditch effort to prepare their child for the pressures of adult society. It’s a horrible fate initially scoffed at by titular Mommy Diane (Anne Dorval, “I Killed My Mother”), whose son Steve (Antoine-Olivier Pilon, “Laurence Anyways”) suffers from ADHD and is an emotional firecracker ready to combust at any moment. He can be sweet and loving, but he’s just as likely to erupt in a shower of confused rage.

It’s a terrible predicament for mother and son, who have to find a way to survive not only the confines of their shared apartment, but also the confines of Dolan’s square-shaped frame. The tightened aspect ratio forces the two characters to rattle around in their little box, subject to the suffocating squeeze of the camera’s constraints. This volatile visual situation leads to absolute unpredictability, because the pair can be entirely loving to each other one moment and melting down before our eyes the next.

The actors take off from the start and once they get moving, there’s no turning back. Somehow, Dolan holds it together and puts his stamp on the overall experience without ever stealing the spotlight from his performers. It’s an absolutely thrilling marriage of artistry behind the camera and in front of it, the two sides working in tandem so they both feel fresh and alive, actors and director feeding off each other, inspiring each other.

Dorval’s performance is the kind of towering achievement that can hardly be quantified. Her Diane, who signs papers as D.I.E., simply exists up there on the screen, a fully-formed woman with a past we know hardly anything about and a future she can only dream of. Her highs and lows shake the movie’s foundation, reinforcing the dramatic framework of the picture with an emotional honesty so powerful that it blurs the line between fiction and reality.

Such is Dolan’s talent and that of his cast. Mommy is never less than a believable portrait of a strained, challenging relationship, but it’s also loudly cinematic at times, such as when Steve approaches the camera and stretches its frame to create a temporary, though invigorating widescreen experience during a particularly uplifting moment in the movie. Dolan can create these fabrications, these exits from reality without taking his finger off the pulse of the relationship and without stalling the moving momentum.

He also knows how to delve into such raw territory without so much as flirting with sentimentality. No treacle flows through here, even though the story is ripe for it. Instead we get mere hints of history, just enough to know that the well of hurt these characters are suffering in runs deep. There’s room for so much information, but Dolan trusts his actors to give us everything we need so none of the outbursts and pain and laughter and happiness and frustration ever feel manipulated or manipulative.

The story unfolds naturally, with the characters pushing each other and themselves by their own volition, never slaves to the plot. When neighbor Kyla (Suzanne Clément, “Amsterdam”) enters the picture, her hazy backstory and social insecurities revealed in the form of a speech impediment make her a prime candidate for befriending Diane and Steve. But Dolan once again steps back and lets the relationship come together on its own terms, so we never feel the cogs in the machine turning to push the pieces into place. It’s a sumptuously organic approach, even though the movie features cinematic flourishes that should clash with this method. They don’t, of course, instead leading to a richer, more magical experience that speaks to the surrealism of life.

Scored mainly to an eclectic collection of 90s hits identified as the soundtrack of an old family road trip that Steve holds dear in his memories, Mommy is a journey of emotions and a tale of three people all wrestling with their demons, both internal and external. It relies on brilliant performances and attains them through a trio of actors unafraid to let it all go in front of the camera. And it’s all brought to life by one of Canada’s most electrifying current filmmakers, a young artist bursting with creativity and heart and power, a force fueled by filmic fury and made fascinating by a tremendous tussle between excess and restraint. 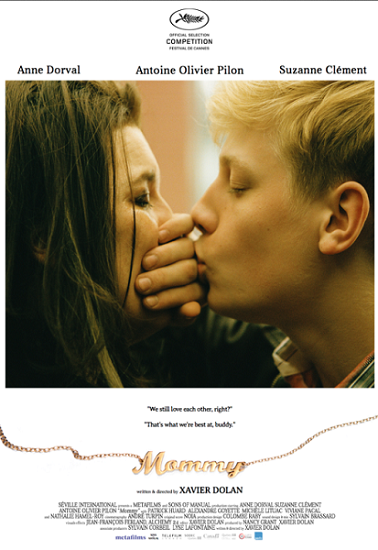