Ah, the bungled bank robbery movie. A movie that could have done with a cameo appearance from Eileen Brennan, Flypaper at least adds a slight kink in its comedy presentation, which results in it being slightly fresher than it perhaps could have been. A bank is being robbed, the heist goes wrong, and the perpetrators are trapped inside. The kicker? There are two sets of robbers, both having chosen the very same bank on the very same day at the very same time.

One of the teams is all business. A three-man team (a Jewish guy, a black guy and a Brit, which sounds suspiciously like the beginnings of a joke), tooled up with hi-tech gadgetry and all-black camouflage gear, break in to Credit International Bank surreptitiously with pre-programmed codes and electronic wizardry. The other team, a couple of hillbilly types who call themselves Peanut Butter and Jelly, go the old fashioned way, entering the building with shotguns blazing. Both methods are equally effective, and the two teams meet in the centre of the bank, surprised to all hell.

Our hero Tripp (Patrick Dempsey) has been busy flirting with the bank’s teller Kaitlin (Ashley Judd) when the robbery begins, and now they are trapped inside with other hostages. Jeffrey Tambor’s one of them, which might give you an inkling of where this might be going, and Curtis Armstrong’s presence confirms it. Yes, although robbery is a serious business, Flypaper isn’t. Instead, it’s a curious affair, part comedy and part mystery. About thirty years ago there were a few movies like this, such as “Clue,” “Murder by Death” and “The Cheap Detective.” If you’ve seen those, you’ll know what to expect here (although there’s no crazy foreigner unable to pronounce the word ‘baubles’ correctly here, sadly).

There’s comedy to be had in the broad caricatures held within the shuttered-down doors of the bank. A lot of it comes at the expense of the idiotic, bungling hillbilly robbers who are just after a little cash from the bank’s ATMs. Ordinarily this “gollee humor” would be annoying but when you learn that one is played by Tim Blake Nelson you’ll find that you’re quite prepared to overlook anything. He’s brought his “O Brother, Where Art Thou?” character with him this time, and plays as a simple-minded but rather adorable fool.

The professionals are less comedy-driven, simply because they’re professionals — or, at least, as professional as can be when you either have a terrible comb-over or are a closet nutjob, and an English one to boot. In the middle of it all, though, is Tripp. He’s a logical man, a mathematical wizard with a touch of OCD about him, and sharp as a shaved tack. He realizes that, no matter what they think, these two bank-robbing teams are not in the same place by accident.

Directed by Rob Minkoff (“The Lion King,” “Stuart Little” for goodness’ sake!!), Flypaper is actually pretty funny. Dempsey is a perfectly good lead (although his on-screen chemistry with Judd is practically non-existent), seemingly with the freedom to conduct his home-made investigation at will (overhead air-ducts to the rescue again, of course). Blake Nelson and Pruitt Taylor Vince extract about as much as one could possibly hope from their dumbfuck robbers, and there’s even time for some rather racy humor courtesy of Security Guard Adrian Martinez — it should be mentioned, incidentally, that this is rated R for its language, which is coarse and frequently funny.

The movie doesn’t fare quite so well in its who’s-behind-it-all plot, I must report, with Dempsey’s character being amazingly intuitive to the smallest of things, and one and one frequently adding up to a great deal more than two. I’m not sure that this is important, though. Flypaper is a comedy first; the addition of a little intrigue is more of an additional extra. I gave up trying to guess who done it (although I was right, as I suspect you will be) and regarded it for its entertainment value instead and, on that score, it’s a winner.

Owner of the Pick 'n' Mix movie review website. Stop by after you've finished here for mostly smaller budget and harder to find movies. Thanks. 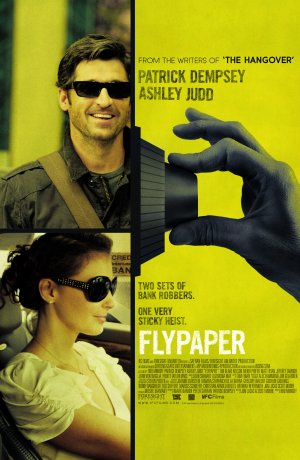