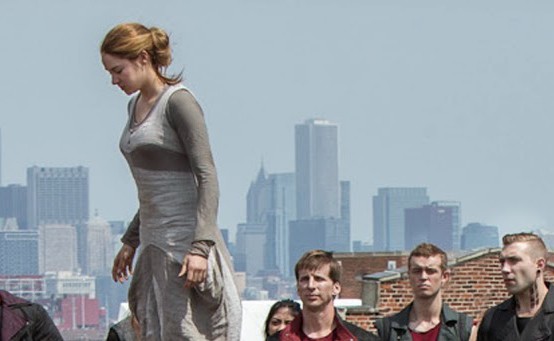 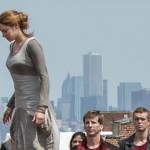 I grew up in a time when young adult books were found in the children’s section of the bookstore and were simply fluff used to keep me quiet on long road trips. In recent years, though, young adult literature has found some serious strength, and the chances of finding a quality story are much better than they used to be. Hollywood has latched onto this pattern, putting out a steady diet of titles in recent years. At first they struck gold with stories driven by fantasy (“Harry Potter” and “Twilight”) and are now seeing success with adapting dystopian sagas to the screen like “The Hunger Games” and “Ender’s Game.” The latest (and one I thoroughly enjoyed reading) is Veronica Roth’s Divergent.

Divergent opens with a voiceover by Beatrice Prior (Shailene Woodley, “The Spectacular Now“), a young girl who has grown up in a time after a great war in what was once Chicago. She tells us that society has found a new way to survive and everyone is divided into five factions, each named for the dominant characteristic of its people: Amity — those who are peaceful; Candor — those who are truthful; Erudite — those who seek knowledge; Dauntless — those who are brave; and Abnegation — those who are selfless. Beatrice and her family live in Abnegation, the faction that governs the rest of society. Being a selfless people, they are most trusted with guiding policy towards what is best for everyone.

Each year, 16-year-olds take an aptitude test that identifies their dominant characteristic and will help them decide which faction to choose. After all, as Erudite leader Jeanine Matthews (Kate Winslet, “Contagion“) tells them, “The future belongs to those who know where they belong.” Beatrice takes her test, but her results are inconclusive — instead of just one dominant characteristic, three emerge. Beatrice is Divergent, and in this society that is considered extremely dangerous (the thought is if you don’t fit into a category, you can’t be controlled). Knowing this, her test administrator, Dauntless faction member Tori (Maggie Q, “Priest“), rushes her out of the room telling Beatrice she is in danger and must hide her results. Her best bet is to stay in Abnegation, but Beatrice, fascinated by their fearlessness, chooses instead to join Tori in Dauntless. Breaking free from expectation she takes on the new identity of Tris, and readies herself to endure the intense physical and mental training ahead.

Using determination to succeed where her physical weakness often fails her, she begins climbing the rankings, catching the attention of her trainers. Eric (Jai Courtney, “A Good Day to Die Hard“) playing the “bad cop,” is determined to break her and all of the new faction members (in one particularly intense “mental” exercise, he tosses Christina (Zoë Kravitz, “X-Men: First Class“) over the side of bridge, “teaching” her to hold on and to never give up). Four (Theo James, “Underworld: Awakening“) is the “good cop,” verbally emphasizing courage and strength, and gives Tris pointers in how she can defeat her opponents in sparring matches.

But as she grows stronger, word of dissention grows — it is said that the Erudite want to overthrow Abnegation for control of the government. This prospect raises concerns for Tris: Her parents (Tony Goldwyn, “The Mechanic” and Ashley Judd, “Olympus Has Fallen”) remain in Abnegation and her brother Caleb (Ansel Elgort, “Carrie”) is a new Erudite initiate. 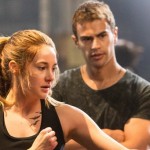 While Veronica Roth’s Divergent is the start to an exciting saga, Neil Burger’s Divergent misses the mark. He and the screenwriting duo of Evan Daugherty and Vanessa Taylor represent the five different factions and present a dystopian Chicago (especially the Choosing Ceremony) correctly, but the characters are not nearly dynamic enough. A film that focuses on introducing a situation for later films rather than delivering action (as this one clearly is) needs quality characters to evoke emotion from us. Unfortunately, Divergent spends too much time developing characters who don’t jump off the screen the way they jump off the page.

Shailene Woodley, as talented an actress as she is, doesn’t come across as a very believable action heroine. At all. Theo James’ Four, who refused appointment as Dauntless leadership, seems more talented in staring intensely at Tris than actually pushing initiates to become stronger. That being said, James’ chemistry with Woodley is undeniable — at least as evidenced by the happy sighs from the teenage girls with whom I saw the film. Eric is too much of a caricature of the tough-guy trainer who pushes too hard; yes, he’s a villain, but unlike in the novel, he’s barely more than a stereotype here. Most disappointing, however, is Kate Winslet’s Jeanine (whose role is amplified here in a similar fashion to Donald Sutherland’s amplified role of President Snow in “The Hunger Games”). She’s rather bland and she’s just not as threatening or diabolical as she needs to be.

Although Divergent didn’t deliver as it should’ve, I’m not ready to cast aside the series (or the genre) yet. There is time to reclaim the story and build the characters further for the more intense “Insurgent” due in 2015. Until then, I cautiously look forward to the adaptation of James Dashner’s The Maze Runner in the fall. 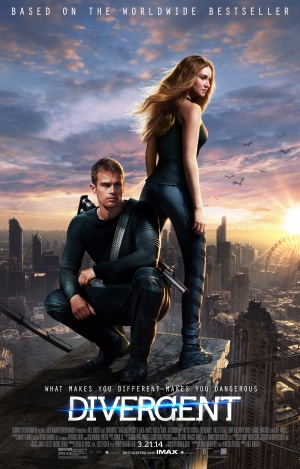